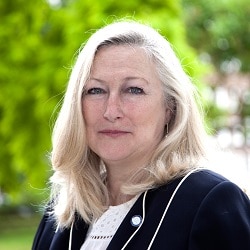 McFarland-Cruickshanks: Won claim for fees up to cap

A barrister was not liable to her instructing solicitors for the fees they claimed they lost out on as a result of her alleged negligence, the High Court has ruled [1].

His Honour Judge Worster, sitting as a High Court judge in Birmingham, said Denise McFarland-Cruickshanks did not owe England Kerr Hands (EKH) a duty under either contract or the common law.

As a result, he struck out the Birmingham law firm’s counterclaim to Ms McFarland-Cruickshanks’ claim for unpaid fees, as well as its defence that, by breaching an agreed fee cap, the barrister had forfeited the right to any fees.

Ms McFarland-Cruickshanks, an intellectual property specialist at Three New Square, and EKH acted for the claimants in a patent action under conditional fee agreements (CFAs).

The claimants were the law firm’s owner, Andrew England-Kerr, and a company he controlled which held patents relating to body armour which incorporated an inflatable life jacket.

As a result, it said, no further fees were payable at all and the £19,755 should be repaid.

The second line of defence was a set-off of the sums due on the counterclaim for breach of contract and/or negligence by Ms McFarland-Cruickshanks.

HHJ Worster said the question of what was covered by the cap – potentially allowing her to claim more than £50,000 – was sufficiently unclear to defeat the application for summary judgment.

However, it was not reasonably arguable that breach of the fee cap agreement amounted to a substantial failure to perform the contract that would enable EKH to refuse to pay for the services it had already received and claim back the fees it had already paid.

EKH claimed Ms McFarland-Cruickshanks’ alleged negligence led the client to settle the patent action and, as a result, the law firm lost the fees it would have received from winning the claim. It also argued that, had the litigation proceeded further, it would have been able to bill more fees. EKH claimed it lost about £150,000.

The contract between the law firm and barrister was made on the basis of the standard written terms and conditions of Three New Square, which reflected model terms produced by COMBAR and the City of London Law Society.

HHJ Worster held that the services under the contract were provided for the benefit of the lay client, not the solicitor – in line with “the traditional relationship between the professions and the lay client” – and so the barrister did not owe EKH a duty of care.

The judge said: “If it were the intention to provide for the barrister to owe a contractual duty to the solicitor in relation to the solicitor’s financial interests in the litigation, then something more would have to be said, because that would entail the provision of services to the solicitor acting for the benefit of himself.”

There was no decided authority that the duty of a barrister to exercise reasonable skill and care extended to not causing the instructing solicitor financial loss, he went on.

“It would be surprising if these model terms led to the imposition of a duty on a barrister which had never been found in any previous authority and changed the fundamental relationship between the professions and the lay client.”

HHJ Worster said the common law also did not create a duty: “Despite the fact that the law of professional negligence is well developed, there is no reported case dealing with the existence of a duty such as that contended for by the defendant.

“Nor is there any discussion of such a duty in any of the leading textbooks in the area.”

In any case, there was no reason to impose a common law duty here because there was a contract – EKH could have made it a term of their agreement but not. The judge struck out the counterclaim.

Ms McFarland-Cruickshanks had confirmed that, if she succeeded in obtaining summary judgment on the claim up to the level of the cap, and the counterclaim was struck out, she would not pursue the balance of the claim.

HHJ Worster give judgment for the capped sum and any interest due.