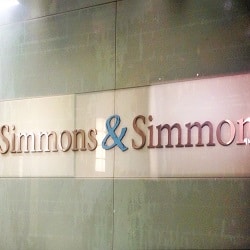 The High Court has highlighted the “implausibility of not one, but two or more, persons from a well-known firm of solicitors being involved in a fraudulent scheme” in dismissing a claim against Simmons & Simmons.

Mr Hinkel’s claim concerned a failed attempt to purchase a property in England owned by the Republic of Iran, represented by Simmons.

He incurred legal costs during the transaction and sought to recover these and lost profits from Simmons on the basis that it was party to a fraud. He claimed the man who was Simmons’ contact, a Dr Azizi, was an imposter rather than a representative of Iran.

HHJ Dight accepted that this was possible, meaning Simmons would not have been properly instructed, but still entered judgment for the firm on the basis that, first, the pleading of fraud was not properly put and, second, there was no evidence properly consistent with an assertion of dishonesty.

Mr Hinkel sought permission to challenge the judge’s second finding, mainly on the basis of new evidence in the shape of a copy of a draft engagement letter which identified Dr Azizi as the intended client contact.

Mr Hinkel said the address given for Dr Azizi was not one for the government of Iran but instead Iran Wood, Paper and Furniture magazine, which was a clear signal he was an imposter – or that the firm had been reckless in failing to check.

Johnson J ruled that the new evidence did not alter his assessment that HHJ Dight was justified in concluding that there was nothing to show Simmons knew or was reckless in checking whether Dr Azizi was an impostor.

There were, the judge said, “other, entirely plausible explanations”, such as that the firm had been careless in running checks, while stressing that he was not saying this had happened.

“To put it another way, another explanation of what happened, even if one starts from the proposition that Dr Azizi was an impostor, is that Simmons & Simmons were also deceived by him, albeit that they were careless in allowing that to happen.

“Yet a further possible explanation (or it might in fact be a gloss on the first) is that although a certain degree of due diligence was conducted into Dr Azizi, it was not finally conclusive. One might perhaps expect as much in dealings with a client based in a jurisdiction such Iran, where chains of authority are no doubt difficult pin down.”

The judge quoted a report from the Solicitors Regulation Authority – which investigated after Mr Hinkel made a complaint to the Solicitors Disciplinary Tribunal – that, while the government of Iran was an existing client, Dr Azizi was a new contact.

The SRA recorded that Simmons made it clear to Dr Azizi and to Mr Hinkel’s lawyers that it would need to visit the Iranian embassy in London to verify the client’s identity and that any document execution would have to happen at the embassy. This never happened because the purchase fell through. (The tribunal rejected Mr Hinkel’s case.)

Johnson J said this indicated that Simmons had “encountered some difficulty” in verifying Dr Azizi’s identity but put safeguards in place.

Though Mr Hinkel contested the accuracy of this, the judge said a statement from a law firm to its regulator could not be disregarded, and in any case he did not have to make a finding – it just showed there was “an alternative explanation which is consistent with Simmons & Simmons behaving honestly”.

He continued: “Relatedly, and indeed as part of the same overall evaluation, I think it is relevant to bear in mind the implausibility of not one, but two or more, persons from a well-known firm of solicitors being involved in a fraudulent scheme.

“Mr Hinkel says I should not put legal professionals in a different category to anyone else, and I agree with that. No special treatment is deserved.

“But what I do say is that, as a matter of common sense, and as a matter of evaluating the evidence overall, it is relevant to bear in mind the inherent improbability of a firm of solicitors taking such a huge risk with its reputation, for the sake of one client or even one transaction.

“That is all the more so in this case where the mechanics of the alleged fraud are unclear to me, i.e., it is unclear precisely how Simmons & Simmons, or [the conducting solicitor], or the other individuals said to have been involved, would have made money out of it.”

Johnson J added that the alternative interpretations were “inherently much more likely or more plausible than the theory that Simmons & Simmons were involved in a fraud”.

However, the judge rejected the law firm’s request to dismiss Mr Hinkel’s permission application on the basis that it was totally without merit.

“The background is complex, and I think Mr Hinkel raised a legitimate question about the significance of the address shown on the draft engagement letter, even if, as matters have turned out, my answer to that question does not ultimately help him.”

He concluded by noting Mr Hinkel’s continuing “sense of frustration” at the failure of the transaction.

“It seems to me, however, that the possibility of matters not turning out as he would have wished was inherent in his seeking to conclude such an important but inherently risky transaction.

“The way matters have developed is unfortunate, but it is not appropriate I think for him to seek to vent his frustration by making allegations of dishonesty against Simmons & Simmons. I hope he may now be able to turn over a new leaf and move forward with other, more profitable ventures.”