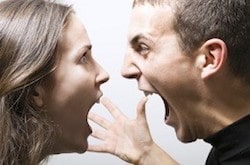 Argument: How the hearing may have looked, minus wigs

There is a “concerning tendency on the part of the advocates simply to interrupt each other in an effort to advance their competing submissions”, a High Court judge has said as he reviewed a hearing that turned into a “shouting match”.

Mr Justice MacDonald said discipline at the hearing – the latest in a decade-long dispute between a father and mother over their now 13-year-old daughter – appeared “to have broken down entirely” at one point.

Barristers for the father, mother and daughter all continued to make points “with little order, structure or focus”, joined by the father himself.

MacDonald J said that even the child’s guardian entered “the arena at one point” before His Honour Judge Scarratt at Medway County Court.

MacDonald J said he “deprecated” a “concerning tendency on the part of the advocates simply to interrupt each other in an effort to advance their competing submissions”.

He said that both the transcript of the hearing before HHJ Scarratt and an earlier one in front of a district judge recorded each of the advocates regularly interrupting each other, although counsel for the father did this “a good deal less” than the others.

“The net effect of that approach was that, as I have observed, neither judge received properly structured submissions, in the proper order on the points that were in issue between the parties, and no issue was ever fully run to ground.

“It is quite clear from the transcript why the father chose to describe the hearing as having descended into a ‘shouting match’.”

The High Court heard that the father and the other parties “did not have a proper opportunity to put their case to the court” on whether a final child arrangements order should be made and what was in the best interests of the child.

MacDonald J said this amounted to a “serious procedural irregularity” and the father’s appeal should be allowed on this ground alone. There should be another hearing, he said.

He said that “whilst counsel were able, up to a point, to make submissions on the question of whether the learned judge should proceed with the final hearing or adjourn it”, the “increasingly unstructured nature of the hearing” meant that “no party ever reached the stage of making submissions, nor did the learned judge invite submissions, on what outcome with respect to contact” was in the child’s best interests.

In one bizarre episode, HHJ Scarratt decided to hear from a psychologist, who the parties had agreed should compile a report on “a plan of clinical work” to help the parents facilitate contact between father and daughter.

Earlier in the hearing, HHJ Scarratt had described the report as “nonsense”, accused the psychologist of having “gone off piste” and having “thoroughly blotted his copy book”, with the result that the report would be put aside.

Despite “strenuous objections” from the girl’s barrister, the psychologist was invited into the court, where he received the following welcome from HHJ Scarratt: “Afternoon. Just come and sit there for a moment will you. Everyone is thoroughly disappointed with this work you’ve done. When I say everyone, I mean everyone.”

Having heard from the expert that he was prepared to do more work on the case, the judge told him he was “released”, which MacDonald J described as a “term of art” as there was no indication that the psychologist had been sworn and no party was permitted to cross-examine him.

MacDonald J concluded that as well as not allowing the parties to make their submissions, the father should have been allowed a short adjournment to prepare an application for a replacement expert.