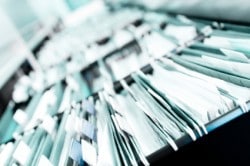 The High Court has backed an application by the Solicitors Regulation Authority (SRA) to destroy millions of documents seized from firms it has intervened in and had to store since, at significant cost to the profession.

It is currently storing 400,000 boxes of documents, held at the cost of £1.25m per annum, a situation described as “plainly absurd” by Iain Purvis QC, sitting as a Deputy Judge of the Chancery Division.

The Solicitors Act 1974 is not explicit about the existence or extent of the SRA’s powers to destroy copy documents it holds after interventions without applying to the court for permission – original documents such as wills and deeds are stored separately and kept indefinitely.

In an action brought by the SRA to clarify its position and seek authorisation to destroy documents, Mr Purvis ruled that the society “does have the power to destroy old and redundant documents seized in connection with interventions”.

However, he refused to grant a formal declaration to this effect for various reasons, including that the case was brought by the SRA, by necessity, without a defendant. “It is fair to say that I have not heard from any party arguing against the application, and that adds to my concern about making a declaration in such general form.”

The SRA then sought a specific declaration that it could destroy the non-original documents seized from 885 firms, totalling around 1.5m files, dating back more than seven years, which currently cost £344,000 a year to store.

Mr Purvis said the court needed to balance the cost and inconvenience of retaining the files, together with the data protection risks involved in doing so, against the risk of damage to clients through the loss of documents of real value if the files are destroyed.

The judge found that “retaining excessive numbers of boxes must necessarily also cause an increase in the cost and difficulty of searches”, while SRA statistics showed that it was in the first year or two of retention that the vast majority of file “repatriations” occurred. Hardly any were repatriated beyond seven years.

“It seems to me inherently unlikely that any significant damage will be caused by the destruction of non-original documents of this age.”

Mr Purvis also ruled that the costs of electronically scanning files prior to destroying the physical copies were “prohibitive” – £2.82 per file. This would also fail to deal with the data protection issue. Writing to each client prior to destruction would be “extremely expensive” as well.

This meant the judge would grant the application, and he went further to say that the SRA could progressively destroy all documents it currently held as they became more than seven years’ old.

Mr Purvis concluded: “I would envisage that (assuming the sanction of the court was still required or desired by the SRA) another application could be made in seven years’ time (and so on) to enable the destruction to continue smoothly into the future. Alternatively it could be made earlier if and when the SRA decides that it wishes to update or alter the policy.

“Those future applications would enable the court to monitor the scheme taking into account any developments (technological or otherwise) in the meantime. They would be simpler than the present application in that the court would be aware that the general policy had been sanctioned in 2015.”