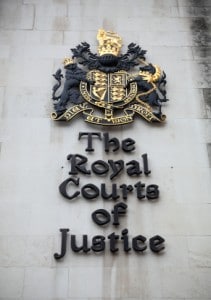 RCJ: judicial review aims to highlight past problems with tribunals

The High Court has this week been hearing the first claim for judicial review arising from last year’s high-profile problems with the Bar Standards Board’s (BSB) tribunals which, if successful, would throw the barristers’ disciplinary regime into disarray.

Among other claims, the Human Rights Act will be invoked over limits to the extent to which Visitors to the Inns of Court are amenable to judicial review.

Doubts were cast over hundreds of disciplinary decisions last year after a series of revelations involving tribunals run at arm’s length from the BSB by the Council of the Inns of Court (COIC); namely irregularities over appointments to tribunal panels. A report by Desmond Browne QC – commissioned by COIC – last year found there were “systemic failures” in the administration of the tribunals.

The claims cover the fact that some members of tribunals sat when their appointments were time expired, although a year ago the Visitors ruled this did not affect the validity of the decisions taken.

Claims also cover the alleged tainting of some members of the tribunal panel who were not, it is claimed, independent or impartial because they were serving, remunerated employees of, or service providers to, the BSB.

One argument put forward by the claimants is whether the so-called ‘Calder fetter’, arising from R v Visitors to the Inns of Court, ex p. Calder [1994] QB 1 – in which it was held that judicial review challenges of the Visitors on points of law are impermissible – can stand in light of article 6 of the Human Rights Act 1998 (right to a fair trial).

Also, claims include that the BSB, as prosecuting authority, allegedly had a role in the appointment and review of non-judicial panellists on tribunals and the Visitors, and that the body appointing tribunal members contained a serving member of the BSB.

They also allege that non-judicial panellists on tribunals and the Visitors had inadequate security of tenure – and were therefore susceptible to pressure – because they were subject to removal without cause.

A BSB spokeswoman said: “It would be inappropriate to comment while the judicial reviews are on-going.”

Barristers John Hendy QC and Marc Beaumont have been representing two of the barristers, instructed by Joel Leigh of CKFT Solicitors, while the other has acted in person. The BSB has been represented by Berrymans Lace Mawer, and Paul Nicholls QC and Tom Cross, both of 11KBW.