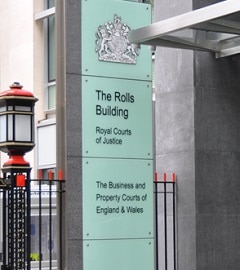 The High Court has found there was an oral agreement between a solicitor and the son-in-law of a client that the latter would cover his fees, which in the end totalled £330,000.

His Honour Judge Russen QC – sitting as a High Court judge – said it was “implausible” [1] that Richard Slade would have taken on the case if he did not have a guarantee of payment.

Mr Slade, who at the time was the sole principal of the now-incorporated law firm Richard Slade and Company, sued Deepak Abbhi for the costs incurred in acting for his father-in-law, Balmohinder Singh, in an ultimately unsuccessful case brought against one of Mr Singh’s sons, Jasminder.

Mr Singh died in 2015 and his estate is insolvent – due “in no small part” to the £1.5m costs liability he incurred in the litigation, HHJ Russen noted – but Mr Slade claimed that he had an oral agreement that Mr Abbhi would pay his costs in acting for Mr Singh.

The underlying litigation was that certain property held by Jasminder was subject to a common intention constructive trust under Mitakshara principles which may apply to a ‘joint’ Hindu or Sikh family.

Without having had the benefit of evidence from Mr Abbhi’s wife, Seema, HHJ Russen drew an inference that she had an expectation of that the claim, if successful, would be of direct financial benefit to her as Mr Singh’s daughter.

Mr Abbhi had loaned Mr Singh $530,000 to run the litigation, before Mr Slade replaced the previous solicitors. The loan agreement said that any further advances would be entirely at Mr Abbhi’s discretion.

Weighing the parties’ different recollections of the meeting at which the discussion over fees was had, HHJ Russen said: “I find Mr Slade to have been a reliable witness though he was prone to an element of witness-box rationalisation of his position on the facts.

“However, I must remind myself that a degree of this was perhaps inevitable when he is an experienced litigation solicitor and the topic in question was essentially ‘contract or no contract?’.”

The judge said that Mr Abbhi “was obviously anxious to distance himself from the action and what the contemporaneous documents show to have been his involvement in it and his awareness of developments within it as it progressed”.

This was in part because “he was still mindful of the potential exposure to a third-party costs application by Jasminder”.

But the judge also noted “a disturbing shift” in his account of the meeting during the trial, and found it significant that Seema, as the only other person at the meeting, did not give evidence.

There were, HHJ Russen said, “a number of points in his testimony when Mr Abbhi provided a less than convincing explanation for what the contemporaneous documents showed…

“Overall, the contemporaneous documents do not lie happily with the denial in the defence that Mr Abbhi and Seema were closely involved in all stages of the action.”

HHJ Russen said that Mr Abbhi’s question about why Mr Slade should have wanted to act for Mr Singh in the absence of a documented agreement with himself, actually helped to provide the answer to the case against him.

“I find it implausible that Mr Slade should have wished to attend the single-entrant beauty parade at the Capital Hotel for the prize of acting in burdensome and costly litigation with nothing more than a hope that he might, but only if Mr Abbhi so chose to exercise his discretion under the loan agreement, get paid something for his efforts.

“I say that because Mr Abbhi’s evidence in the witness box produced a more expansive and markedly different account of the July meeting than that set out in his defence and witness statement.”

The judge concluded that he preferred Mr Slade’s account of the meeting, which was supported by the contemporaneous documentation.

He found the terms of the funding agreement were that Mr Abbhi would give the money to Mr Singh for him to pay Mr Slade because Mr Abbhi was worried about the possibility of a third-party costs order.

HHJ Russen gave judgment in favour of Mr Slade, with damages and interest to be assessed after a further hearing.