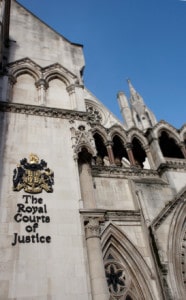 The Lord Chancellor has been awarded almost £1m by the High Court in its battle with a legal aid firm over payments on account (POAs).

Mr Justice Holgate said the evidence showed “over-claiming to a substantial extent in a substantial number of cases” by Charles Ete & Co, based in Barking, East London.

“The breaches in different cases took place over a prolonged period of time,” Holgate J said. “The failure to have final bills prepared and submitted was persistent in a substantial number of cases over several years.”

Holgate J went on: “The normal expectation is that where a case has been concluded, a firm of solicitors will want to have a final bill prepared as soon as possible so that they may recover from the legal aid fund any difference owing to them between their properly assessed costs and payments on account previously received.

“Where a solicitor does not follow that expected course and no reliable, sufficient explanation is provided for substantial delays in providing final bills, then it may be appropriate to infer an unwillingness on the part of the solicitor to comply with his billing obligations.

“In some cases that unwillingness may also be linked to a risk or likelihood of the final account showing that money is owed by the solicitor to the legal aid fund.”

Holgate J said the claim related entirely to family legal aid work. “From 2009 the LSC became increasingly concerned as to the large number of certificated civil cases in which the firm had not submitted final bills so that a reconciliation could be carried out between the POAs and a final assessment.

“Bills for a substantial number of cases had been promised by the firm on a number of occasions and still not produced.”

The court heard that following two reports containing some “serious criticisms” of the firm’s billing practices, the law firm’s family legal aid contract was terminated in 2012. Later in the year the firm’s crime contract was also brought to an end by the then Legal Services Commission.

The Lord Chancellor sought repayment of over £795,000 plus interest in relation to the family POAs. Charles Ete & Co argued that it was owed over £455,000 by the Lord Chancellor, and the civil and criminal contracts had been wrongfully terminated.

“I find that Mr Ete’s explanations for the delays in billing, whether in correspondence or in evidence, lack any credibility,” Holgate J said.

“He sought to lay the blame for billing at the door of other parties, whether the LSC, or costs draftsmen, or lawyers who had removed files, so as to claim that the firm had not been unwilling to submit final bills on concluded cases.”

Holgate J rejected the repeated claims that the firm had been “unable to have final bills prepared because of financial constraints” and rejected arguments that a costs draftsman was to blame for the delays.

“The wholly unreliable explanations put forward by Mr Ete lead me to the conclusion that the defendants were plainly unwilling to submit final bills when cases were concluded and those bills ought to have been submitted.”

Dismissing the law firm’s counterclaims for wrongful termination of legal aid contracts, Holgate J ordered judgment for the Lord Chancellor in the sum of £795,184.

However, the judge said that in October 2015 the Lord Chancellor made a part 36 offer for payment by the claimant to the defendants of £700,000 plus interest.