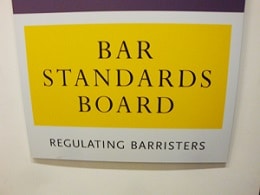 A senior barrister has been suspended for failing to pay over a period of nearly five years what was due to a senior clerk at his previous chambers, of which he was head, when it was dissolved.

A Bar disciplinary tribunal said the treatment of the clerk, David Brinning, was made worse by the fact that he had held his post for 32 years.

Hilary Roberts was suspended for two months, and also fined £2,000 for failing to co-operate with the Bar Standards Board (BSB).

The outcome of the tribunal was announced last November, giving little idea of the misconduct, but a detailed ruling from the tribunal has recently been published. These rulings are a new initiative by the tribunal.

Mr Roberts was head of Temple Chambers in Cardiff at the time it closed in 2012; he subsequently joined 9 Park Place.

The tribunal, chaired by Paul Lowenstein QC, found that Mr Roberts did not comply with contractual obligations in respect of Mr Brinning, which led the clerk to issue employment tribunal proceedings.

The claim settled in December 2012 under the auspices of ACAS on the basis that Mr Roberts – on behalf of the members of the chambers at the time of dissolution – would pay Mr Brinning £57,500 over six weeks, less £10,000 he had already received.

But the terms were not met and as at 19 July 2017, £12,500 was still owing, despite Mr Brinning sending several letters asking for payment.

As a result, he complained to the Bar Standards Board. The tribunal noted: “Notwithstanding that complaint, Mr Roberts still did not trouble himself to reply to his chambers clerk of 32 years’ standing and indeed we are told no further payments have been made from the outstanding sum even today.

“No explanation has yet been given to us in any form at all in advance of the tribunal as to why that money has not been paid. That is a matter which we take very seriously indeed.”

The tribunal said an impact statement by Mr Brinning explained that losing his job and salary was devastating, exacerbated by the fact that his wife fell seriously ill shortly after. He explained the financial strain that the non-payment had caused, and the anxiety it had caused his ill wife.

Mr Roberts represented himself at the hearing, but the tribunal said it found several elements of his mitigation actually to be “points in aggravation”.

The principal issue was Mr Roberts’ claim that he had been badly let down by others, which was why he could not pay the money owed. The barrister told the tribunal that he put his hands in his own pocket and paid Mr Brinning substantial amounts in the past.

Mr Lowenstein said: “But we set against those facts, the fact that you, as head of chambers, an experienced member of the Bar of about 40 years, had indemnities from the other members of chambers.

“You did not pursue the other members of chambers for reasons best known to yourself and, as head of chambers, that is what you have to do if you owe somebody money.

“You also put before us in mitigation that you said you did not want to trivialise it, but then you went on to tell us that it was a relatively small sum.

Mr Roberts did not provide evidence of his income but said he earned about £50,000 net a year, “which members of the tribunal have observed is not an insubstantial amount and out of that you should have found over this period of time the money to pay Mr Brinning if you could not or were unwilling to recover it from others”.

His failure not to make any offer to pay the outstanding money “stands significantly against you”.

The tribunal was also not impressed by Mr Roberts’ demeanour. “You had to be pushed before you demonstrated any remorse whatsoever… You seem to have absolutely no understanding – or at least no expression of understanding – of the impact of this on Mr Brinning and indeed on his late wife.”

The tribunal also found that Mr Roberts failed to engage with the BSB: “Mr Roberts has been the subject of many communications from the BSB but has replied only twice… and then only as suited him, and then did not do what he said he would do on either occasion.”

Mr Roberts’ failure to respond after the BSB granted his request for an extension to reply to the complaint, it said, “is a serious professional matter and is also to be viewed with some opprobrium particularly given Mr Roberts’ level of seniority at the Bar”.

Mr Lowenstein concluded: “We would have liked to have been able to order you to pay Mr Brinning promptly the money you owe him. We cannot do that because the rules have changed, but we can make an observation. The observation is that in our view you should.”