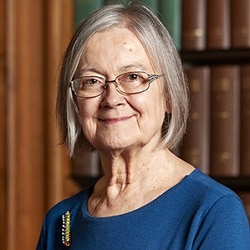 Hale: Not such a rosy picture in higher courts

Half of the judges in England and Wales will be women in fewer than 14 years, Lady Hale predicted this weekend, suggesting that her male former Supreme Court colleague’s view that gender parity would take 50 years was wrong.

In 2015, Lord Sumption, who retired from the Supreme Court last year, infamously suggested that gender equality among the judiciary should not be rushed as it would discourage men from applying, and said it could take 50 years to get parity with men on the bench.

But speaking at the Bar Council’s annual conference in London on Saturday, Lady Hale, who retires as president of the Supreme Court in January, said: “We’ve done the sums and we don’t think that’s right.”

Since the prediction, she said, the percentage of women judges in courts in England and Wales – not including tribunals, where women already make up 50% of judges – has increased from 22.6% to 32%

“If this rate were to be maintained, we would need fewer than 14 more years to get parity in the judiciary as a whole,” said Lady Hale, who has previously said the courts could learn from tribunals [1].

But she said the future of the higher courts “doesn’t look so rosy” as the percentage of women in senior posts reduced higher up the judicial ladder.

This year marks the centenary of the Sex Disqualification (Removal) Act 1919, which allowed women to enter the legal profession. Lady Hale, who is a strident supporter of greater diversity, said progress towards equality since 1919 has been “terribly slow”.

Although women make up around half of those who become barristers, she said they make up only 36% of the practising bar and 16% of QCs. The low number of female QCs, she said, was in part because women did not apply, but also because they were not given the types of cases that would enable them to.

For example, she said the majority of barristers appearing before the Supreme Court are male and the percentage has changed little in the 10 years of the court’s existence.

Highlighting the “noticeable falling away” of women after 15-20 years in practice, Lady Hale said the legal profession was “wasting the talents of women”.

She said: “All those able young women who go into law should be enabled to stay in it and not forced out by the long-hours culture in some parts of the profession, or by the changes to court sitting hours.”

But she added: “Career expectations and trajectory is structured around the life of a person without demanding responsibilities outside of work. Increasingly it is motherhood rather than gender that is holding people back…

“Women and men should feel free to put their family responsibilities before their own professional advancement if they want, but many of them want to do both and find this increasingly hard because of the way much private practice is organised both at the Bar and in law firms.”

Lady Hale said the legal profession should be as reflective of society as a whole and embody the guiding principles of justice, fairness and equality to help ensure that everyone in society felt confident that the law was there for them if they needed it.

Diversity, she said, enhanced the rule of law, democracy and equality. But she stressed that equality for women was “most prominent” because “women are not a minority group”.

While the pace of changed has quickened over the last 50 years, she said there was still a great deal to do to achieve equality for women. But she said “the momentum is with us, the force is with us ladies”.

She added: “Let’s say it out loud for the women and for the men who have supported us in our struggle and hope that you continue to do so.”