Haddon-Cave: Online justice is “best hope” of simplifying the law 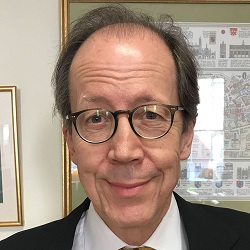 A “new way of conducting litigation” with online courts and procedures is the “best hope” of simplifying the law, Lord Justice Haddon-Cave has said.

Sir Charles said judges as well as lawyers and legislators were to blame for the law becoming so complex – a judgment did not “always have to be an academic treatise”, he observed.

A “glimmer of hope” lay in the court reform programme and the new digital platforms being created, however.

“Reform of procedure should be aligned with this – by combining and simplifying the myriad of procedure rules and rewriting them with litigants in person in mind.”

The appeal court judge said the “best hope for simplification is in starting again with a new way of conducting litigation”, as in the online money courts, and “trying to make the whole process, as well as the related rules, as simple as possible from the outset”.

Delivering this year’s Gray’s Inn Reading for Gresham College on English law and descent into complexity, Haddon-Cave LJ went on: “A creative approach should also be adopted to increasing the public’s access to the rules.

“The government must engage with the public and understand their needs, with a view to presenting the rules in an interactive format which is simple and easy to understand.

“From blogs to podcasts, there are multiple ways in today’s digital environment to generate an understanding of the procedure of our legal system.

“Justice requires public confidence in the legal system from citizens of all ages. Only after achieving these successes will we be able to truly be able to say that the civil justice system is simpler, cheaper and less time-consuming.”

The lord justice said judgments, like the law, had become longer and more complex and there had been a “remarkable” increase over “just the past couple of decades”.

He said that by 2013, Supreme Court judgments had risen to an average of 89 paragraphs, compared to 68 at the House of Lords, and the number at the Supreme Court last year “appeared to be about 100”.

“I put my hand up straight-away and confess to have written some pretty long and discursive judgments. It is easier, sometimes, to do one’s thinking on paper – though not always such fun for the reader.

“It is also easy to get tempted and distracted into writing about interesting points which are not essential to the outcome of the case.”

He went on: “We should also be astute to exercise the self-denying ordinance of only dealing with the key points in issue and not be tempted to write exegesis on points which don’t.

“Ideally, we should also avoid excessive citation of authority (in particular cutting and pasting large chunks of cases into judgments) and seek in simple form to summarise the principles which apply.”

Between 1983 and 2009, he pointed out, Parliament enacted over 100 criminal justice bills and over 4,000 new criminal offences were created, while immigration rules and guidance were said to run to over a million words. In the 21st century alone, there have been eight Immigration Acts.

On judicial review, he said “one has to query whether this is a body of public law that has become too complex for its own good, and, frankly, for the good of the public”.

In particular, he said the “constant refinement and Enigma variations” on the Wednesbury principles, and the “spawning of a myriad of different public law tests in an attempt to achieve ‘perfection’ in every scenario has led to a great deal of obscurity and entanglement”.

He criticised both criminal and civil procedure for being too complex. He said volumes I and II of the White Book ran to over 6,000 pages; some thought it had become “an embarrassment” in a modern jurisdiction.

“I venture to suggest that the more complex modern life becomes, the more important it is constantly to strive to simplify the law.”