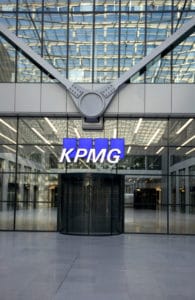 KPMG: Big 4 are a growing threat

Large law firms should consider becoming “general contractors” to manage their clients’ disaggregated legal needs amidst growing demand from in-house lawyers to use alternative legal services providers (ALSPs) – with the Big Four accountants a threat “that cannot be overstated” – a new report has suggested.

The other routes would be simply to “part with this portion of a client’s business” or for firms to take the expensive option of building their own ALSP capacity.

The report – produced by Thomson Reuters Legal Executive Institute, in partnership with the Georgetown University Law Center for the Study of the Legal Profession in the US and Oxford University’s Saïd Business School – said many law firms were already choosing to take the contractor approach.

“Under this model, legal processes are disaggregated into component parts, with law firms continuing to offer high value-add guidance and possibly managing the overall process in the same manner as general contractors.

“Alternatively, law firms could play a niche role by collaborating with the legal department in co-ordinating service providers for their legal requirements.

“As this trend has emerged over the past few years, it has been increasingly referred to as law firms developing a capacity for ‘supply chain management’.

“Other law firms are opting to try to capture this new client demand more directly by creating their own affiliated entities to function as ALSPs, creating for the firm an opportunity for new business and profit, but at a potentially large expense.

“Firms considering such an approach must be careful that the entities they create meet a client need and are a point of differentiation for the firm in order to avoid incurring substantial expense to establish an affiliate that does little to drive profit.”

It said that particularly in matters governed by fixed fees, “lowering the cost of production of a matter by leveraging alternative vendors for certain portions of the work can help lower the cost of that portion of the matter, increasing the ability for the firm to turn a profit”.

But the report added: “This type of large-scale process redesign could have lasting implications for the traditional pyramid structure within law firms.”

The researchers conducted an online poll of 554 law firms and 271 legal departments, along with detailed interviews with 38 respondents from the US, UK, Canada and Australia.

“Whether coming from a small start-up or a large accounting firm, the emergence of such a wide variety of new alternative providers has given clients a plethora of new vendors from whom they can receive services and further flex their buying power,” they said.

“At the same time, the evolution of the ALSP market has presented an interesting dichotomy for law firms, increasing competition, but also giving rise to new potential avenues for growth.”

The report recognised that the ALSP market was still at an early stage, and said much of its growth was being driven by in-house lawyers.

“Absent client pressures, it is unlikely that law firms alone would be driving the use of alternative providers. Those law firms that do proactively embrace partnerships with ALSPs will stand apart from their peers.”

The report said that for firms in jurisdictions where alternative business structures (ABSs) are permitted and gaining popularity, “the potential impact of the Big 4 accounting firms on the future market for law firm services cannot be overstated” – the shift in demand for legal services was already being felt in the UK, it claimed.

KPMG, EY and and PwC all have ABS licences, and earlier this month RSM became the first top 10 accountancy practice to launch a legal practice.

The report said: “As the ALSP market evolves, the Big 4 are likely to play an ever-expanding role… Law firms worried about such competition, however, can take steps today to begin incorporating ALSPs into their service delivery model… to offer more cost-effective models, thereby blunting the potential impact of any such possible shift.”

It concluded: “Firms that are successful in incorporating ALSPs into their delivery models may well be those that can find a balance between ‘build’ and ‘buy’ solutions, creating affiliates for those types of services where the firm has particular strengths or its clients have specific demands, and acting as the client’s ‘general contractor’ in situations where such an approach is more appropriate.”