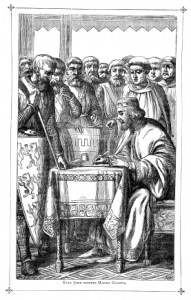 The first ever UK Global Law Summit – an event bringing together the government, legal professional bodies and business – will take place in 2015, justice secretary Chris Grayling has announced.

Taking place in London in February 2015 – the year of Magna Carta’s 800th anniversary – the summit’s aim is to champion the UK as global leader in legal services and as the destination of choice for global business in the 21st century.

It is described as an “independent legal business conference” founded by the Ministry of Justice, the City of London Corporation, the Bar Council and the Law Society.

Its steering group is chaired by Allen & Overy partner Sir David Wootton – a former Lord Mayor of London – and Henry Bellingham MP, a barrister who held the shadow justice brief before the last election and then had two years as a minister in the Foreign Office.

The summit is being managed by an executive team led by director Julia Bateman – who is also head of international at the Law Society – and the Bar Council’s head of communications Toby Craig, who will have the same role for the event.

Mr Grayling said: “The Global Law Summit 2015 will be a world-class conference showcasing the UK’s unrivalled legal expertise, based on a long history of freedom and justice.

“I am determined to help UK law firms and lawyers succeed in the global race and develop the business opportunities created by their world-class reputation.

“We will be working with legal professional bodies and business to champion one of the UK’s greatest exports, our legal system. The summit will also mark 800 years of the Magna Carta, a tradition that still provides the foundation for the best commercial and legal environment for business to flourish.”