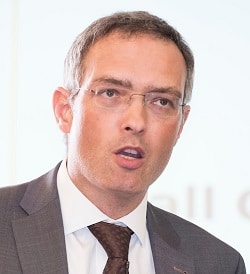 One of the claimant solicitors working with the Ministry of Justice on the new small claims limit for personal injury cases says he is operating on the assumption that it will not happen until October 2019 at the earliest – six months later than the government’s target.

David Bott, senior partner of Bott & Co, also warned that the reforms may unintentionally trigger a “have a go” culture among claimants.

Mr Bott, who is on the technology working group, one of five set up by the Ministry of Justice on increasing the small claims limit, is a former president of the Association of Personal Injury Lawyers and still sits on its executive committee.

Speaking at the association’s annual conference in Birmingham yesterday, he said it was a “huge task” in particular to create the so-called gateway portal that would allow litigants in person to access the personal injury portals and medical reporting portal, MedCo.

There were also a series of major questions yet to be answered, most notably what would happen to claims where liability was denied.

Under the current portal arrangement, such claims enter the fast-track. Were they in future to go to the small claims court, it would quickly become overwhelmed, Mr Bott predicted.

There might instead by some form of alternative dispute resolution, but again that would have to be able to cope with the volume.

Other issues included who would run the gateway portal – and the relationship with PortalCo and MedCo – along with the detailed specification and budget needed to build it, drafting a new pre-action protocol for the Civil Procedure Rules, and how it would work with the Online Court that it is being created separately.

Yet another issue still to be resolved was how to deal with the non-personal injury elements of a claim.

Though the government has said it wants the new system to go live in April 2019, Mr Bott said: “I don’t think anybody thinks it will happen [then]. October 2019 is the earliest I can see… The only thing you have is a government will for it to happen, but not much definition about what ‘it’ is.”

He noted that the relevant date for using the new system would be that of the accident, not submission of the claim notification form, meaning that law firms could have around a year of grace before the impact of the higher limit really hit home.

It was suggested from the audience of his session on making small claims work that defendant insurers might routinely deny liability in the hope that litigants in person would be discouraged from pursuing the case further.

At the same time, Mr Bott predicted that the lack of advice, the lack of consequences for losing on liability and the fact that a “one-second injury” would have the same value as one that lasted just shy of three months under the new tariff, would trigger a “have a go” mentality for “millions of claimants”.

Drawing on his experience of running flight delay claims through the small claims court, Mr Bott suggested that firms looking to adapt to the new regime would have to view software developers as being “just as important as lawyers”.

Given how much margins would be reduced, law firms wanting to stay in the market would have to totally re-engineer themselves and invest heavily in technology, he said.

“Can we get cases in for near zero and process them four times more efficiently?” he asked. “That’s a level of efficiency that’s hard to achieve.”

Mr Bott said the worst thing firms could do was make no or insufficient changes to their practices. They either needed to try and make a success of the reforms, or exit and leave with enough money “to move on to the next adventure”.