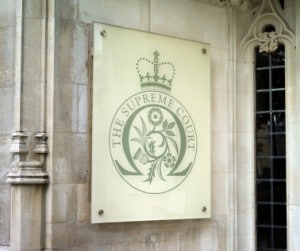 Supreme Court: for government to change the law on LPP

The government does not intend to extend legal professional privilege (LPP) to non-lawyers, the Ministry of Justice confirmed yesterday after accountants urged Parliament to level the playing field for multi-disciplinary entities.

The Supreme Court yesterday declined to extend LPP even where a non-lawyer is giving legal advice that they are qualified to give, a decision one senior lawyer said would leave accountants “crying into their soup” and tax lawyers “dancing in the street”.

Among the court’s objections was that widening the scope of LPP was ultimately a matter for Parliament, and an MoJ spokesman confirmed to Legal Futures there were “no plans to amend the legislation” to extend LPP.

While he avoided criticising the decision directly, Michael Izza, chief executive of the Institute of Chartered Accountants in England and Wales, which intervened in the case, said: “The current position on LLP is unprincipled and anti-competitive for individuals and businesses who we believe should be able to seek the best professional advice upon the same terms whether from lawyers, accountants or indeed other appropriately qualified professionals.

“The way in which legal services are provided is changing as a result of the Legal Services Act with the creation of multi-disciplinary practices. As a matter of urgency, Parliament needs to find a way to resolve how issues such as LPP are addressed within these new structures.”

Section 190 of the Legal Services Act 2007 extends privilege to alternative business structures where the communication is made through or under the supervision of a lawyer.

Meanwhile, solicitors and barristers expressed satisfaction at the ruling. The Law Society, which intervened in the case, said the decision “maintains the existing certainty about the scope of LPP, an important human right of clients” and highlighted the court’s confirmation that ”there is no doubt that the justification for [LPP] is as valid in the modern world as it was when it was first developed by the courts”.

Chief executive Des Hudson said: “A lawyer’s duties and responsibilities to the client and to the courts are not available on a Pick ‘N’ Mix basis. The relationship between a solicitor or barrister and his or her client is a precious human right, tested and refined by centuries of common law. [LPP] supports the process of law, speeding the conviction of the guilty and securing the acquittal of the innocent.”

The Bar Council also intervened and chairman Maura McGowan QC said: “LPP is a fundamental right and principle of clients which underpins the provision of legal services. We believe that extending it to non-lawyers would represent an unjustified departure from its long-established limits.”

She added that the ruling “makes absolutely clear that the status quo, which works extremely well in practice, should remain”.

Herbert Smith Freehills’ partners Heather Gething and Julian Copeman, who advised the Law Society, said that if the Supreme Court had extended LPP to communications between accountants or other professionals and their clients, it would have made the process of reviewing documents for privilege for the purposes of disclosure “much more intricate” which “would in turn increase the time spent and costs incurred in the process of disclosure, with an increased risk of satellite litigation”.

Peter Clough, head of disputes at Osborne Clarke, said the ruling meant clients were “better off going to a law firm” for confidential tax advice, adding: “Tax accountants will be crying into their soup tonight, and tax lawyers will be dancing in the streets… Accountants will no doubt think it is unfair, as it will drive clients concerned about maintaining confidentiality in advice provided to them into the welcoming arms of law firms.”