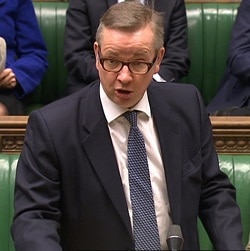 Gove: slow strangulation of supply of talent to criminal Bar

More serious criminal defence work should be restricted to barristers, and solicitor-advocates who want to do it should have to requalify, the former Lord Chancellor, Michael Gove, has suggested.

He also called for a “higher-quality filter” for those wanting to become barristers and reiterated his support for a levy on City law firms to aid those less fortunate.

Mr Gove was giving the Longford Lecture, which he said he was invited to do during his time in office and was a commitment he wanted to honour given that it was named after the famed penal reformer.

He offered a wide-ranging critique of the problems in criminal justice, and listed a series of reforms which he said were vital to improve it. One of them was reviving the criminal Bar.

He said: “Always the poor relation of the rest of the Bar, criminal work is now in increasing danger through the slow strangulation of the supply of talent it needs to prosper.

“Any gifted graduate now contemplating a career in the law will be aware that huge fees accrue to those who are successful in the commercial Bar and salaries of hundreds of thousands of pounds a year are the norm for partners in top City law firms.

“It would require a particularly elevated commitment to serving the interests of justice to ignore those temptations and instead opt for the criminal bar, where remuneration is falling and annual earnings after fees and taxes for many are lower than almost any comparable professional.”

He listed several factors have “conspired to undermine the position of the criminal Bar”, even though they were “well intentioned at the time”.

Extending rights of audience to solicitors “should have brought welcome competition which drove up standards and opened the profession of advocacy to new talent”.

Mr Gove continued: “But I fear that, together, alongside some of the changes made to the operation of legal aid, these developments have not worked in the broader public interest.”

He explained: “More and more individuals have sought to qualify for the Bar, at the same time as crime has been falling. And while there has been a growing number of people who wish to act as advocates, the barristers’ chambers who act as a quality filter cannot accommodate these numbers.

“At the same time some solicitors’ firms have built up in-house advocacy teams, often recruiting those who have not made it into barristers’ chambers. For these firms it often makes economic sense to pocket both the fees due to solicitors and payable to advocates rather than instruct independent barristers.”

While there were “some very fine solicitor-advocates”, the MP referred to the findings of the Jeffrey review and said there was “no doubt that, individual for individual, barristers provide a better service”.

“With work siphoned off from barristers to solicitor-advocates, with the development of an entirely new class of ‘plea-only’ advocates who do not profess to have all the skills and competences of a qualified barrister and with legal aid payments not just cut, but structured in such a way as to facilitate solicitors’ firms keeping business in-house, the criminal bar is being squeezed to the margins.”

“This represents not just a shrinkage in the amount of work undertaken by the professionals best qualified to defend those whose reputations and liberty are at stake, it also indicates that access to the best representation is increasingly restricted to the wealthy.

“More than that, the criminal bar has always been the principal pool from which our judiciary has been drawn…

“Restoring the criminal bar to health is therefore a precondition of ensuring both that every citizen who finds themselves in court is represented effectively and that all our courts continue to benefit from a superb judiciary.”

Mr Gove said there was a case for saying that defendant in all Crown Court cases and the more serious magistrates court cases should be represented by a barrister.

“High quality existing solicitor-advocates could, of course, become barristers in appropriate circumstances. I also think there is a case for a higher-quality filter being applied before people can read for the Bar in the first place and would like to see the Inns of Court play a significant part in establishing a higher quality threshold.

“And I think we should investigate how we can better regulate those solicitor firms who refer clients to in-house advocates or those with whom they have any sort of other commercial relationship.”

Mr Gove also mentioned the “responsibility of the very wealthiest in the legal profession to do more to support the rule of law and access to justice, which we could deliver through a levy on the incomes of the most successful”.

The Ministry of Justice is still to publish its response to the consultation entitled Preserving and enhancing the quality of criminal advocacy, which closed just under a year ago.