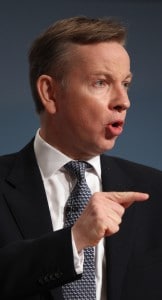 There will a review of the Legal Services Act 2007 during this Parliament, the Lord Chancellor Michael Gove announced today.

Giving evidence to the justice select committee, Mr Gove was asked by fellow Conservative MP Alberto Costa – a dual-qualified English and Scottish solicitor – whether, following the decision of his predecessor not to conduct a review of the Act in the last Parliament, there would instead be one in the next five years.

In a follow-up, Mr Costa sought his view on the number of approved regulators. Mr Gove said: “I wouldn’t want to pre-empt any conclusions that I might reach, but I do think that there is a danger of regulators falling over each other’s feet.”

More broadly, Mr Gove said his “biggest problem” was the squeeze on the Ministry of Justice’s budget. “So there may be some very difficult decisions that we will have to take.”

“So I’m keeping a very close watching brief on what happens as a result of these legal aid reforms, but it was the case that too much taxpayers’ money was being spent on legal aid. There have to be reductions.”

His appearance came within minutes of the Criminal Bar Association (CBA) announcing that its members had voted 55/45 in favour of adopting a ‘no returns’ policy, meaning they would not pick up legal aid briefs that fellow counsel have to drop. However, only around 45% of members voted

Mr Gove said he was “disappointed” by the outcome, but that it was “interesting” the vote was closer than many anticipated, and that “a number of members” did not vote.

He spoke extensively about the importance of the independent criminal Bar, praising the CBA leadership and its chairman Tony Cross – who opposed ‘no returns’ – by name.

“I think they recognise that we want to work constructively with them and with the Bar in order to make sure that we continue to have a healthy independent criminal Bar – it’s one of my top priorities – and I hope notwithstanding the vote today, which I think may be as a consequence of bruised feelings in the past as much as anything else, that I can continue to work with the leadership of the CBA and the Bar Council to address a number of concerns that I think are perfectly legitimate.”

He said he also wanted to speak to the leaders of the profession “overall” about their concerns on legal aid.

Speaking positively about the Jeffrey review of criminal advocacy, Mr Gove said there may be some changes that need to be made to “safeguard” the quality of advocacy and make sure there is a “healthy pipeline of future recruits to the Bar”.

He said: “One of the concerns I think we all have is that for talented young people leaving university, who have a vocation for justice and want to enter the law, the criminal Bar is proving an increasingly unattractive route to go down. That’s a great pity.”

Mr Gove made no mention of solicitors at all during his 95 minutes before the committee, except to confirm his intention to prevent them seeking referral fees from barristers so as to make sure only the best advocates are instructed for any particular case.

On court reform, he said the MoJ was waiting for the Treasury to sign off the business case. By the end of this Parliament, however, he said he hoped to see a “transformation” of both criminal and civil justice.

But he confirmed there would be court closures, although he said the MoJ would seek to maintain a policy that people are not more than an hour’s travel from a court.

Mr Gove said there would be reviews of the overall impact of the Legal Aid, Sentencing and Punishment of Offenders Act 2012, as well as this year’s court fee rises, and that he would act if they needed to be revisited.

On court fees, he indicated he would be looking for examples of ‘rough justice’ – and equally would consider raising fees further if the MoJ judged the market could bear them.

Asked specifically about employment tribunal fees, he added that there was no evidence yet that people with meritorious claims were not getting access to justice – saying a fall in the number of claims did not indicate in itself that there was a problem – or that employers were behaving worse as a result.