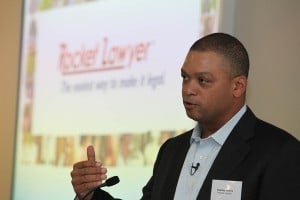 Rocket Lawyer, the Google-backed US online legal document service, is on track to launch in the UK later this year, with lawyers set to be offered the chance to join its panel from next month, Legal Futures can reveal.

Speaking to this website last week during his latest visit to London, founder Charley Moore said he had recruited a well-known figure to lead the UK operation, which he anticipated employing up to 10 people, including lawyers.

The London base, which should open by April, is set to be Rocket Lawyer’s international headquarters as it targets further expansion outside of America. Legal Futures first revealed last year that the service – which had around 20m customers in 2011 – was heading for the UK.

It will not cost practitioners anything to sign up to Rocket Lawyer. There are two tracks for them. First they can list t

hemselves with a profile. Users will find and contact them for their legal issues. The lawyer can charge freely for whatever time and services they provide.

The other service is ‘Rocket Lawyer On Call’, for customers who have purchased monthly/yearly legal plans and benefit from services akin to having a lawyer on retainer. The customer will create a document and a lawyer will review it for free. The lawyer can then try and sell other services to the customer, and if successful have to discount their published hourly rates by 50%.

Customers will be able to rate lawyers and their ‘score’ will be the default mechanism for listing them when users search for legal assistance.

Mr Moore argued that Rocket Lawyer will not take work away from practitioners; rather it will tap into latent demand for legal services and expand the market.

He added that for a “small fee”, firms could use Rocket Lawyer themselves as a workflow tool for document creation.

The documents are currently being drafted, he said, pointing out that he began Rocket Lawyer in 2007 with just one document available online. “We have the experience and competence to scale from one document to thousands in a short period of time,” he said.

The funds are in place for the expansion, after Mr Moore raised $29m in backing over the past six months. Google Ventures is one of his investors. The service will be promoted largely through web marketing and partnerships, he said.