Getting different generations working together is key to law firm success, research says 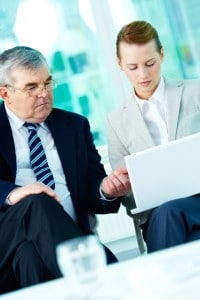 Bridging the generational gap: “So explain to me once more what this computer thingy is”

Law firms are failing to unify the different generations within their workforces and are suffering as a result, research has suggested.

According to international law firm network Globalaw – whose English member is London practice Gordon Dadds – there need to be formal programmes within firms that get the different generations talking and working together.

They all have a range of different aspirations and concerns, the study said. “For example, Traditionalists favour formal and structured methods of work, while Generation Z is more interested in changing the status quo and pushing for new methods of delivering a task.

“Therefore the law firms which succeed are those best at creating environments which accommodate these different cultural drivers – such as setting clear expectations for staff, using incentives instead of disincentives, and providing feedback.”

Among the tips for firms were to introduce formal mentoring schemes that intentionally pair people who might not normally interact as part of firm business – such as a senior partner and junior associate – and to focus on value contribution more than hours worked, as the younger generations are more focused on work-life balance. The importance of leadership from the top was stressed.

Speaking at an event on the issue at Globalaw’s annual conference last week, Cowden Rayburn, an associate at US firm Moore & Van Allen representing Generation Z, said: “We have a formal programme called ‘Ages and Stages’, which helps ours lawyers to share different skills – such as how to pitch to clients – amongst the different generational groups. This helps to make collaborative behaviours ‘automatic’.”

Speaking for the Traditionalists, Richard Sandover, chairman of Australian law firm Jackson MacDonald, said: “The different behaviours of different generations in a law firm can be problematic. For example, there was some controversy when we moved from having closed offices to an open-plan arrangement, as many were against the change.

“However the new space lent itself to more positive interactions between the generations and different practice groups. We now enjoy a much more collaborative culture, which helps all our lawyers – young and old – and no doubt benefits our client work.”