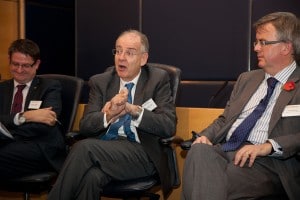 Changes in the legal market since the Legal Services Act will accelerate, with competition and legal aid cuts leading to a “tragic but inevitable” pressure on non-specialist high street firms, according to the politician who shepherded the Act through Parliament.

Former Lord Chancellor Lord Falconer of Thoroton, now a shadow justice spokesman, speaking last week at the Legal Futures 2020 vision conference in London, said people being “left out in the cold” was the fault of the government “slashing” legal aid, not alternative business structures (ABSs).

He was optimistic the public would be willing to support greater state funding once legal services became more accessible.

In a debate that brought together senior figures from across the profession, issues ranged from the impact of ABSs to the nature of what makes a profession. Legal Services Board (LSB) chief executive Chris Kenny said he was “surprised” at the pace of change brought about by the 2007 Act, despite it having been “a great British compromise”.

Andrew Caplen, the vice-president of the Law Society, said the Solicitors Regulation Authority’s focus on the financial health of high-risk firms had been “a good wake-up call” because there had been issues with, for instance, over-borrowing, and other “not dreadfully good behaviours”. The SRA’s initiative had been “quite helpful” to make firms think about their financial footing.

Lord Falconer said the impact of the 2007 Act reforms would grow “faster and faster”. He added that “in some respects it’s tragic but I think it’s inevitable” that the “model… of the non-specialist firm” will succumb to pressure from the “reduction in the amount of state money” and competition from new and efficient providers.

In a series of passionate contributions, Kerry Underwood, senior partner of Hertfordshire firm Underwoods, said that while service levels had to be raised, the discussion of ABSs risked trivialising the vital role of lawyers in standing between the state, or big business, and the individual. To applause, he said the idea that “everything about the legal profession is wrong and needs to be changed is… deeply, deeply harmful to the rule of law and to society and to the really big decisions which lawyers and judges have to make”.

Mr Underwood’s concerns about the withdrawal state funding were shared by well-known researcher and author Roger Smith, who nevertheless expressed hope that the internet and ABS-driven efficiencies might some day benefit the group of people currently in danger of being frozen out of the legal process. He cited the use of the internet in the Netherlands to enhance access to justice as a “game changer”.

Matthew Briggs, chief executive of Brilliant Law, the first non-lawyer commercial law ABS created from scratch, denied his venture was “driving the price to the bottom”, or “doing down the profession”. While not a traditional law firm, it wanted to be “different in a good way”, that helped to lift performance and efficiency while focusing on such things as “value, affordability, accessibility, and transparency”. The business sector had previously been “not well served by corporate firms”, he argued.

Mr Kenny said firms specialising in such things as human rights and mental health law should consider innovative ways of practising law and ABSs, and raised as an example the virtual practice run by former Law Society president Lucy Scott-Moncrieff. But the LSB was “not on a mission to force everybody to become an ABS or get external investment”, but rather remove obstacles from those who wanted to use alternative models.

Lord Falconer rejected any notion that ABSs threatened fundamental principles of law that ensured unpopular defendants were represented. There had been no harm in making civil law services, such as conveyancing, available cheaper and more efficiently. Legal aid cuts affected the “role of the law in intervening between the state and the citizen”, but not ABSs.

He added that lawyers had used their previous monopoly over legal services to “take advantage of clients” and overcharge them. The 2007 Act told lawyers they had to keep their ethical standards but also “deal with the market in a way the market finds convenient”.

Mr Smith said a “pile it high, sell it cheap transactional model” of law was “perfectly appropriate” in most legal transactions but that there was a “tension” between that and defending the rule of law at the “hard end”, such as bringing unpopular actions against the government. However, the tension was “just about manageable”.

Mr Underwood said “all life was about cross-subsidy” and that in the past low-paid legal aid work had been “subsidised by conveyancing”. The debate now appeared to be “all about profit”, but “that’s not what motivated me to get up and do legal work every day – and nor is that true of most lawyers”.

Mr Caplen said he was concerned that although access to justice was a regulatory objective, “different or more legal services outlets… doesn’t necessarily meet the unmet legal need”. Mr Kenny responded that “if there ever was a golden age of legal aid it’s long since gone” and regulators had to try and find ways of “loosening up the supply side of the market” to ensure more people could access legal services.

Mr Smith said: “ABSs can play a real role because of the capital they have and because the way that capital can be used together with technological innovations like the [internet] to provide high volume, low cost services.” But he added there remained “35 or 40% of the population” who were too poor for commercial businesses to be interested in.

Steve Arundale, head of professional sectors, commercial banking, at NatWest, said many firms he saw that were public spirited were also profitable, efficient consumer businesses, “fairly aggressive” in the way they marketed themselves and innovated. They tended to reinvest profits in social projects rather than “rip them out for personal gain”. They were “actually running two businesses in parallel”, he reported. In general, firms were becoming more savvy about reserving cash that was previously borrowed.