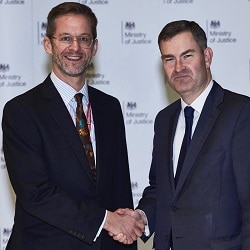 Richard Heaton, permanent secretary at the Ministry of Justice (left), last night tweeted this picture of him welcoming David Gauke to the department

There have now been six Lord Chancellors since the Conservatives came to power in 2010, and Mr Gauke – who was an assistant at City firm Macfarlanes before his election in 2005 – is the first lawyer since barrister Ken Clarke, who held the post from 2010 to 2012.

“Justice is the cornerstone of our democracy and a key part of a fairer society,” he said yesterday. “That is why I am delighted to be taking up the position of secretary of state for justice and the vital role of Lord Chancellor.

“I am looking forward to meeting experts and front-line staff to drive the crucial work started by my predecessors, to reform our prisons and courts, uphold the rule of law, and promote our world-leading legal services.”

Mr Gauke, the 46-year-old MP for Hertfordshire South West, had been work and pensions secretary before the reshuffle, after seven years at the Treasury, latterly as chief secretary.

He read law at St Edmund Hall, Oxford University and after a year working as a parliamentary researcher, he attended Chester College of Law before becoming a trainee solicitor.

He qualified at what was then City firm Richards Butler, now part of Reed Smith, before joining Macfarlanes. His wife is also a solicitor and currently a professional support lawyer at LexisNexis.

The reaction on social media after Mr Lidington’s departure was anger at the turnover of justice secretaries in recent years and what that said about the lack of priority given to justice issues by the government.

According to The Guardian, the prime minister’s spokesman denied that having such a high turnover was a problem.

He said: “The commitment from the government throughout its time has been into ensuring that rehabilitation is a priority and to break the cycle of reoffending. That has been a continuous theme and I’m sure it will be one that the new secretary of state will continue with.”

Mr Gauke’s appointment was cautiously welcomed if for no other reason than he was the first legally qualified Lord Chancellor since 2012.

But his Labour shadow, Richard Burgon, tweeted: “David Gauke has spent most of the past year defending the Tories’ cruel and callous Universal Credit plan and refusing to fix it when it was clear just how much it would hurt those affected. Very worrying for those who hope government’s legal aid review will help most vulnerable.”

Former Labour Lord Chancellor Lord Falconer – whose 2005 reforms opened the door to non-lawyer Lord Chancellors – tweeted: “Congratulations to David Gauke as new LC. It would be so good if he demonstrated asap his commitment to rule of law, protection of judges and true access to Justice.

“He would find warm support from lawyers but more importantly from those who can no longer enforce their rights.”

Frances Crook, CEO of the Howard League for Penal Reform, tweeted: “In seven years: Clarke, Grayling, Gove, Truss, Lidington and now something else will have to learn the complexities of the law, sentencing, prisons and human rights.”

High-profile solicitor David Allen Green, law and policy commentator on The Financial Times, said: “Like the idea that after hundreds of years of the Lord Chancellorship being monopolised by barristers, we had to have Grayling, Gove, Truss and Lidington before it ever went to a solicitor…”

But leading criminal law specialist Andrew Keogh of CrimeLine was not sure that this was a good thing: “That the new Lord Chancellor is a lawyer is not something that pleases me. Quite the contrary, as it will make his inevitable failure to meet the responsibilities of that great office, all the sadder. From a non-lawyer, much more understandable.”

But Inner Temple Library arguably won the day with this tweet: “We have had 12 head librarians since 1709. Just putting that out there.”

Prime Minister Theresa May will today start reshuffling the lower ranks of government, having confirmed late yesterday that Attorney General Jeremy Wright would stay in post.