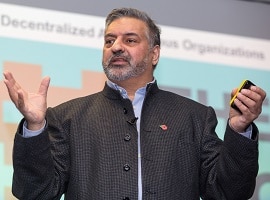 Technology is transforming the world at a furious pace and artificial intelligence (AI) – and the legal frameworks that will emerge from it – offer “massive opportunities” for lawyers, according to a leading futurologist.

Giving the keynote address to the Legal Futures Innovation Conference in London on Tuesday, Rohit Talwar, chief executive of Fast Future, whose clients include governments and major multinationals, said new technologies were already starting to transform the context in which lawyers operate.

As well as AI – “the biggest game changer of all” – he highlighted disruptive technologies such as the secure digital transaction platform blockchain, the Internet of Things (networked everyday devices) and 3D printing as heralding a world in which no sector of the $78tn (£63tn) global economy would be unaffected.

Legal work generated by the new technologies was up for grabs by lawyers who had the acumen to grasp it, he argued.

He cited the exponential development in the capacity and speed of computers and said that a similar speed of change was occurring in other industries. For example, in China, a 57-storey building was erected from prefabricated components in just 19 days – “faster than lawyers could write the occupancy contracts”.

Mr Talwar predicted that within five years, or sooner, AI applications would start to emerge with near-human levels of intelligence. In this timescale, “the landscape will have changed” and “it’s very likely that 20-50% of the legal work in certain sectors will just be automated”.

Other industries would be demanding that lawyers kept up, he warned: “We’ll start to see finance and a lot of other sectors pushing back on legal to say ‘we are transforming ourselves – are you moving at the same pace?’”

However, he reported that the legal sector’s use of AI was actually more advanced than most

Meanwhile, countries would be moving towards “algorithmic democracy” in which the law would increasingly be embedded in software. For example, he said, if you speeded, your car would automatically fine you, or if you tried to drink drive, sensors in the car would allow it to respond by disabling itself.

The issue of embedding rules within software was also raised recently by Professor Richard Susskind.

The technology for this so-called “algocracy” already existed, Mr Talwar pointed out: “We move into a world where the world basically monitors itself, the IoT embeds sensors into everything. We are there now in terms of the ability to interpret that data from sensors… the IoT is already around us.”

Also, the security provided by blockchain opened up the possibility of distributed autonomous organisations (DAO) – companies without employees. He gave the example of a DAO used by eBay, which “handles tens of millions of disputes without any human involvement”.

He added: “Blockchain is going to open up all sorts of interesting legal issues and questions that have never been raised before.”

Lawyers able to move beyond their emotional reaction to the impact of technology on the traditional practice of law could become expert on the issues and what they might mean for their clients’ businesses, Mr Talwar suggested.

“If we understand all this in particular from a commercial stance, we can talk to our customers about what might be coming in science and technology and what will this mean for their industry.”

By doing so lawyers could replace the dispute and other legal work lost to new technology: “A lot of the old work disappears. New work emerges because of advising clients on how to use the new technologies and how they change your industry and those new sets of disputes there.”

He suggested that smaller firms could improve their businesses from low-cost but sophisticated technological ‘tools’ now available – such as a $99 application which uses a firm’s database to create a tailored marketing campaign according to clients’ characteristics: “Whether you’re a one-person law firm or a massive law firm this is there for you now, the tools are starting to emerge, you can go online and use them… All the big players, IBM, Google, Amazon, are putting tools out there in the marketplace for anyone to use – because they want to learn from your data”.

Giving context for his thesis that lawyers would be needed to create legal frameworks for the new technologies, he predicted that scientific developments that enabled “human augmentation” – both cognition-enhancing drugs and cosmetic technology involving “body modifications” such as altering skin colour and hair thickness – would arrive on the high street soon.

Equally, there would be new ownership models such as “self-owning cars where the manufacturer will simply release the vehicle into the community, the car will earn money, publish its accounts on the Internet and share its revenue with whoever made it, whoever services it, whoever fuels it”.

He continued: “All of these things that are coming are going to require a kind of re-framing of our understanding of the law, new contracts, new regulatory systems, new rollback and recovery mechanisms… What are the rules going to be about rolling blockchain out into the core transactions of society?

“Where we are putting AI in to replace human decision-makers, whether in healthcare or right to social security, how are we going to handle disputes?… As we put more data into the cloud how do we protect our privacy?”