From law student to partner in less than 12 months 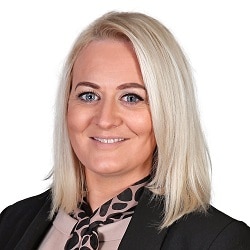 A trainee chartered legal executive has spoken about how she is due to become a partner in a law firm less than 12 months after finishing her law degree.

Natalie Foster, currently head of commercial at North Yorkshire Law (NYL) Solicitors, said her skills as a business manager at Barclays Bank were the reason why she had been offered partnership.

She will become a non-lawyer partner of NYL in April, after it became an alternative business structure this month.

“I don’t think anyone could have expected when I signed up for my law degree that four years later I would be helping run a business.

“When you’re running a business, you need to think commercially. You need to look at the costs, the brand and the business plan. All those skills are transferable, which is why I was offered the partnership.”

Ms Foster said she studied law at A-level in Scarborough before becoming a business manager at Barclays Bank for seven years. After having children, she started a degree in law and practice at the Scarborough campus of Coventry University.

During her second year, she sent her CV to regional law firms and secured part-time work as a legal assistant in the family law department of NYL Solicitors.

The following year she moved to the commercial work, where she was supervised by managing partner Richard Boyd.

“In the final year of my law degree, I was evolving into a paralegal, operating my own cases and doing my own drafting. All my old contacts got back in touch.”

Ms Foster finished her law degree last summer and became a full-time paralegal and CILEx affiliate while studying for her diploma, which she hopes to complete this summer.

NYL, based in Scarborough and Whitby, opened an office in York in December, and plans to move its ‘hub’ this year from Scarborough to York.

She said she had helped recruit eight new staff and two trainees started work in September last year – the first for eight years.

Ms Foster said that rather than opening any more offices this year, the firm would invest in its case management system, and in developing online conveyancing and wills.

“It’s mainly about getting the right people into the firm, raising the profile and improving client care.”

She added: “The idea of solicitors stuck in their ivory towers has gone. Without a doubt our consumers are digital. Firms need to invest in systems that allow clients to trace matters, even when they’re on holiday.”