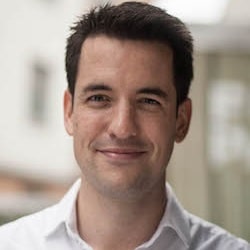 van Binsbergen: Keen to learn about scaling from the experts

Four legal businesses are among 30 chosen to join a flagship programme for mid-stage, fast-growing tech companies, with organisers saying it shows how the legal market is ripe for disruption.

The Upscale programme, run by Tech Nation, “helps the UK’s most promising tech companies to accelerate their growth and unlock the key to scaling successfully”.

Over six months, the companies will receive more than 60 hours of support, delivered by over 20 “scale coaches”. The programme is free, and Tech Nation does not take an equity stake in the businesses.

Now in its fifth year, well-known tech businesses such as Monzo, Bulb, Improbable and Bloom & Wild were in previous cohorts.

It said legaltech was one of the “prominent trends”, highlighting that the legal sector was “one that is ready for disruption”.

Tim Pullan, chief executive of ThoughtRiver, said: “Upscale was one of the only programmes which we felt could deliver true value in terms of rapid scaling, and improving our awareness of projects, initiatives and opportunities not currently on our radar.”

Daniel van Binsbergen, chief executive of Lexoo, added: “Upscale has been a hugely successful programme since it launched and has attracted some of the UK’s biggest start-up names in the past few years.

“We applied because we really liked the idea of learning deeply about scaling from the best experts and alongside some of the other most exciting start-ups in the UK.”

Meanwhile, US firm Orrick has joined Clifford Chance and Latham & Watkins as a shareholder in Reynen Court, the platform aimed at simplifying the adoption of advanced legal technology by large firms – effectively an app store for cloud-based products.

We reported earlier this month that it had already secured $3m of additional funding after an initial $7m funding round led by the latter two law firms in December 2018.

The development of Reynen Court, which has been running a beta trial since last August, is supported by a consortium of 19 law firms. It is due to launch commercially very shortly.