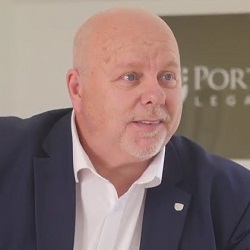 Worth: Other local firms have followed our example

Staff at a wills and probate business that attracted worldwide media coverage after introducing a four-day week and putting up salaries are expected to work harder during their shorter working hours, the firm’s founder has said.

Trevor Worth, managing director of Plymouth firm Portcullis Legals, said productivity “definitely went up” after the move to four days, as well as sales, making it “a win all round”.

However, he said that if an employer was “good enough” to introduce a four-day week, staff should “give their time appropriately” to work, which did not include arriving at one minute to nine and immediately making themselves a cup of coffee.

Portcullis Legals made the move in 2019 and gave its workforce, now 10 strong, a pay rise to allay concerns that it might be a cost-cutting exercise – at the same time, their hours were reduced from 37.5 a week to 34.

Mr Worth, who is qualified with the Society of Trust and Estate Practitioners, said clients were given the mobile numbers of staff, meaning they could be contacted during their day off if it was “really urgent”.

He said staff should “work hard, but smart”, and make sure they “got up and away from the screen”, particularly at lunchtime.

“The danger is that people think they’ve got less hours to work, so they sit in front of their screens for longer.”

Speaking to mental health charity Lawcare for its The Legal Mind podcast, Mr Worth said the four-day a week model adopted by Portcullis involved not working on Fridays.

This meant staff spent less time on “life administration” while they were at work, such as dentist or GP appointments.

He introduced the four-day week because he wanted to “do something different for the benefit of our team”; the positive “unintended consequences” came later.

Mr Worth said local firms Portcullis worked with had followed its example, including a financial adviser and accountancy firm.

The shift needed to be carefully explained to the firm’s professional partners, to avoid becoming something of a “bête noire” if other firms’ workers started asking for the change.

Mr Worth said when he spoke recently to a large firm of accountants and asked who wanted to work a four-day week, everyone in the room put their hands up.

Although some clients reacted to the change by saying Portcullis must be making too much money, the overall reaction was “fantastic”.

Mr Worth added that there was no need for businesses to bring in costly consultants to achieve the move.

In terms of future changes at Portcullis, he suggested that innovation could become one of the firm’s key performance indicators.

“People should be rewarded for thinking differently. To incentivise innovation, maybe we should find a way of measuring it.”

After the global media described Portcullis as the “first firm in the world” to introduce a four-day week, Mr Worth said its website had 11m hits in four months, which moved it up the Google rankings.

“It’s not really about a four-day working week model, it’s about flexible working. It improves lifestyles at home and at work.”

Lawtech company Arken.legal, which produces software for the wills and trusts market, moved to a four-day week in July last year.