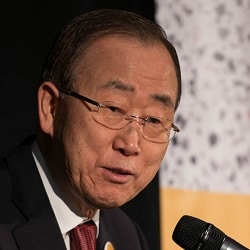 Ban: Governments must not turn lawyers into political scapegoats

The former secretary-general of the United Nations has condemned Home Secretary Priti Patel’s recent attack on lawyers – although he did not criticise her by name.

Ban Ki-moon also urged the legal profession to reform itself to improve access to justice for people around the world.

Opening this year’s virtual International Bar Association conference, Mr Ban said he was “deeply concerned at the increasing attacks on lawyers around the world, sometimes from the highest levels of government”.

He continued: “Legal professionals are being harassed, threatened or in some instances killed simply for doing their job. Attacks on lawyers undermine the rule of law. Labelling lawyers who are simply doing their jobs as ‘activists’ is both disingenuous and dangerous.”

The profession reacted furiously in September after Ms Patel complained that “activist lawyers” were frustrating efforts to remove migrants, and later said “lefty lawyers” acting for migrants were “defending the indefensible”.

This was followed by Prime Minister Boris Johnson claiming that the criminal justice system was “being hamstrung by lefty human rights lawyers”.

Mr Ban said: “If governments are genuine in their commitment to ‘build back better’ from the pandemic, then they must uphold their international human rights obligations and refrain from turning lawyers into political scapegoats.”

He was speaking in his capacity as deputy chair of The Elders, the group of former world leaders founded by Nelson Mandela to work for peace, justice and human rights. Its chair is former Irish president Mary Robinson.

Last month, The Elders issued a statement expressing grave concern at the failure of global leadership in response to the pandemic and the inequality it has both exposed and exacerbated.

“Justice is at the heart of all these issues,” Mr Ban told delegates. “Indeed, justice is on the frontlines of this pandemic. Justice actors face daunting responsibilities as they design, implement, and enforce new measures to prevent the spread of infection.

“Measures that heighten the risk of human rights abuses can undermine trust, at a time when the justice system most needs to maintain the public’s confidence.

“Furthermore, there are serious implications of the economic downturn for common justice problems that have an economic dimension – disputes over housing and land, conflict at work, problems with debt, disputes within families, or trouble obtaining access to public services.”

Mr Ban said access to justice, and closing the justice gap faced by many, was a key priority for The Elders.

“We will not be able to reduce this justice gap without significant action and reform by the legal profession. The legal profession needs to adapt, and the disruption caused by the pandemic should be harnessed and deployed as a catalyst to longer-term, progressive reforms.”

He said one possibility was “to embrace” paralegals, “who represent a cost-effective way of expanding legal empowerment services, particularly in resource-poor countries without large numbers of lawyers”.

He highlighted Sierra Leone and Indonesia as “two positive examples of countries that have recognised paralegals which has enabled them to expand access to justice services”.

Mr Ban noted that funding for access to justice has declined by 40% in the last four years, a situation worsened by the Covid-induced economic downturn.

More broadly, he said the pandemic has “laid bare manifold failures”, including insufficient coordination and information-sharing to contain the pandemic, inadequate economic coordination by the G20 to protect the global economy, and insufficient financial assistance to support the southern hemisphere.

“There has been near paralysis in the UN Security Council as geopolitical rivalries trump humanitarian priorities, and sustained attacks on democratic safeguards, human rights and the rule of law, sometimes under the pretext of ‘emergency measures’.

“From the Black Lives Matter protests in the United States to the recent killing of protesters by police and security forces in Nigeria, we have seen far too many examples of disproportionate use of force, disregard for the law and impunity for those who abuse their powers.”

Mr Ban concluded by saying that “the clear and principled voice of the legal profession is needed more than ever”.