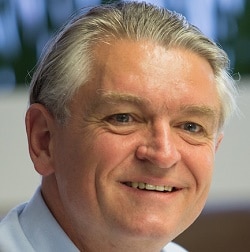 Law firm entrepreneur Chris Nott, founder and senior partner of Cardiff firm Capital Law, was among those from the profession to be recognised in the New Year’s Honours.

Mr Nott received an OBE for services to business and economic development in Wales. Capital Law’s innovations include creating an alternative business structure with the British Medical Association and setting up its own third-party litigation fund.

He chaired an advisory panel to help the Welsh government craft a growth strategy aimed at encouraging City law firms and other professional businesses to relocate back-office operations to Wales. He also set up the Central Cardiff Enterprise Zone and then worked on creating a Development Bank for Wales.

Mr Nott, who recently took part in a Legal Futures roundtable on innovation, called The Value Proposition, said: “I’m lucky. My job lets me work with interesting and able people amongst our clients and in the wider community and it’s fun helping them. Wales is a great place to be.”

James Gosling, a former shipping partner and now a consultant at City firm Holman Fenwick Willan, also received an OBE for services to the legal profession and maritime hostages.

He has acted in more than 70 piracy cases and in 2015 was recognised by the shipping industry for the firm’s pro bono work to secure the release of 22 ‘forgotten’ seafarer hostages in Somalia.

Joanne Wheeler, founder and co-chair of the Satellite Finance Network and a partner at City firm Bird & Bird, received an MBE for services to the space sector. She was one of the first British lawyers to work in-house at the European Space Agency.

Corporate lawyer Bob Gilbert, former deputy senior partner of what was then Wragge & Co and now chair of the Intellectual Property Office, received a CBE for services to the legal profession and the economy.

Vera Baird QC, one-time Labour MP and Solicitor-General and before that a criminal defence barrister, became a Dame for services to women and equality. Now Northumbria Police and Crime Commissioner, Ms Baird was recognised for “a lifetime [of] ensuring that those who have suffered previously ignored forms of violence are supported and given a voice”.

The notes to her award said: “Her legal expertise led to fundamental changes in case law around domestic homicide; her political and campaigning experience contributed to reforms to make the criminal justice process more victim-centred; and her charitable work has addressed challenging issues such as human trafficking.”

Several government lawyers received honours: OBEs for Jennifer Fowler, senior advisory lawyer to the Upper Tribunal (Administrative Appeals Chamber), for services to the administration of justice, and Caroline Ross, a lawyer at the Department of Energy and Climate Change, for legal services to international climate change negotiations; a CB (Companion of the Order of the Bath) to Peter Fish, director general of Government Legal Department C and Home Office legal adviser, for legal services to government; and Iain Macleod, legal adviser at the Foreign Office, was made a KCMG in the Order of St Michael and St George, for services to diplomacy and overseas policy.

There were also OBEs for Sara Lewis, head of prosecutions at the Metropolitan Police, and retired solicitor and tribunal judge Rodney Huggins, for services to the community in Reading.

Gerard Elias QC, Commissioner for Standards for the National Assembly for Wales, became a CBE for services to standards of conduct in public life, while fellow barrister Emma Chamberlain was awarded an OBE for services to government tax policy.

Academics recognised included CBEs for Nicola Lacey, professor of law, gender and social policy at the London School of Economics, for services to law, justice and gender politics, and John Spencer QC, professor emeritus of law at Cambridge University for services to the reform of law concerning child witnesses.