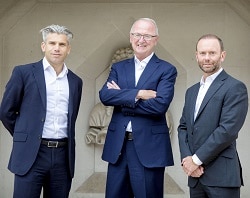 A former hedge fund boss who wants a better service for those needing family law services is backing a multi-disciplinary law firm aimed at high net-worth individuals and family offices.

Calibrate Law was set up by litigator Guy Davis late last year with a view to Mr White’s investment if the model attracted clients.

Speaking yesterday to Legal Futures, they said there had been a positive reaction to the service Calibrate Law offered.

They have hired accountant Craig Kemsley from Grant Thornton, where he had been head of the private client tax practice in London, to offer tax advice, while teams to handle family law and wills and trusts work will join by September, taking the headcount to 21.

In time, other services may be added, such as company/commercial law and wealth management.

The other co-founder of the firm is John Pryor, who has spent 40 years in the construction industry and is Calibrate Law’s chief operating officer.

Mr White recounted the bad experience he had endured in the family courts after his divorce, which among other things showed him the need for a more co-ordinated approach involving legal, tax and other private client advice.

He also railed against the traditional law firm model and hourly billing. “Most law firms are suffering from a huge costs base that drives behaviour that isn’t necessarily aligned with the client,” he said.

“Law in aggregate has not accepted or introduced modern technology into any of its processes. Therefore there is a huge opportunity here for law to be more efficient.

“As a hedge fund manager, I’ve analysed a lot of industries and never found one so self-serving and so negatively positioned towards embracing technology and change.”

Mr White stressed that his priority was providing a better service. While he did not want to lose money, he said he was not focused on quickly maximising his investment: “The value we create will be in the equity, not the profits. There is no exit strategy.”

Mr Davis added: “We’re both doing this to create a legacy as much as run a business. I want to see change. I want the general public’s perception of law to change.”

The solicitor said the firm was keen to align its interests with those of its clients, meaning it uses both conditional fee and damages-based agreements.