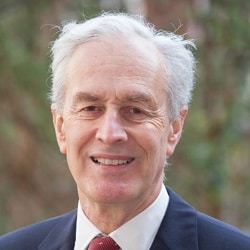 A former Bar Council chair has issued a call to arms to the profession over China’s sanctions on a London chambers, saying nobody should take on work transferred away from the set.

Lord Sandhurst QC, who practised as Guy Mansfield QC, declared: “We are all ‘Essex Court’ now.”

The chambers was one of four organisations, along with nine individuals, who China said “maliciously spread lies and disinformation [about] the so-called human rights issues in Xinjiang” – in its case, a legal opinion written by four members on the abuse of the Uyghur population

Writing for the Society of Conservative Lawyers, the QC said the move struck “at the heart of the English legal system and the services offered by English lawyers”.

He went on: “Today it is the members of Essex Court Chambers who are sanctioned. But tomorrow it might be Clifford Chance, Freshfields or some other major City law firm or chambers of barristers which wittingly or otherwise offends the Chinese state.

“The Financial Times is right to say that ‘the situation underlines the increasingly difficult position for UK lawyers that are exposed to potentially lucrative arbitration work in China via Hong Kong’s legal system’.”

He stressed the need for a co-ordinated response, calling on the Bar Council and the Law Society to act “at once” as well, and involve the International Bar Association and the American Bar Association, “to ensure that lawyers everywhere act with solidarity”.

He continued: “Essex Court Chambers cannot be left isolated. It would be intolerable if other chambers or law firms simply took over work which is transferred away from Essex Court. Urgent thought must be given to special codes of conduct to prevent that.”

The QC said the sanctions “must be seen as an outright attack on all who offer services whether as lawyers or arbitrators to businesses and individuals in China”.

He explained: “For what it means is that if a lawyer advises someone in terms which are unappealing to the Chinese government and the recipient of that advice makes it public or the Chinese government otherwise takes a dislike to what is being done by the client that lawyer is at risk of similar future sanctions.”

Contracts British companies have with Chinese clients typically provided for disputes to be resolved by arbitration, often in Hong Kong – work from which Essex Court barristers would now be barred.

“So, unless the Chinese clients agree to an arbitration outside China, for instance in Singapore, the British firm’s freedom of choice of advocates is now subject to Chinese Government vetting.”

Lord Sandhurst – who inherited a family title and does not sit in the House of Lords – said there needed to be wider unity across the Western world to insist that Chinese companies have to agree to dispute mechanisms outside China in future contracts.

He said the UK government should use its ambassadors “in Washington and elsewhere… to work to bring other countries” onside.

He noted that China’s “mouthpiece”, Global Times, boasted that the fact Essex Court had removed mention of the opinion from its website “shows China’s counter-sanctions are an effective deterrent against rumours”.

Lord Sandhurst said: “These steps by the Chinese state foreshadow dangers for a much wider body than those immediately affected.

“They call for a concerted and strong response by lawyers and governments from all democratic state… This is a call to arms which must not be ignored. We are all ‘Essex Court’ now.”