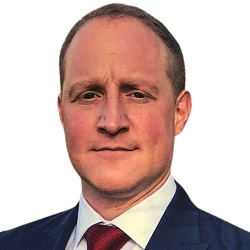 Evans: We approach the law differently

A former major in Army Legal Services has described how taking a “military approach” has helped him when launching his law firm this week.

He said Ubique’s approach to its specialised service for landlords was to focus on what the military would call “end states”, which could also be described as “client pain points” and work backwards.

“Instead of advertising that we do property law and expecting clients to find us as a law firm that does landlord and tenant work, we want to provide a specific solution to an end state, regaining control of your property, backed by fixed-fee packages.”

Mr Evans said Ubique’s service for landlords, www.LandlordSolicitors.com, provided “seamless onboarding” for clients online, followed by the use of a secure client portal, the result of a partnership with Ethical IT.

“We approach the law differently. I’ve been a landlord and I understand what the issues are.”

Mr Evans said that later in the year Ubique would be launching a new service for armed services personnel and veterans.

Unlike the law firms currently providing services for them in areas such as personal injury and family work, Ubique would “speak the same language”.

Mr Evans said he had recruited a former army solicitor to run the service in Northern Ireland and another solicitor, a former RAF Wing Commander, for Scotland.

After this, the solicitor said he wanted to launch a “hybrid” service for in-house counsel, where lawyers could be engaged in a “much more flexible” way.

Before he joined Army Legal Services, Mr Evans worked both in-house and in private practice after he qualified at Hugh James in Cardiff.

Mr Evans said that, using another military term, Ubique could operate one day on a “hub and spoke” model, using experienced lawyers as consultants while training junior lawyers centrally.

He said Ubique took its name from the Latin word for ‘everywhere’, chosen because “the future is in cloud computing, and the cloud is everywhere”.

It also happened to be a motto of both the Royal Artillery and the Royal Engineers.

“For army lawyers, our approach is to adapt and overcome issues. We are always trying to think of innovative solutions to practical problems.

“The idea is to get in front of a problem, so the army does not have one  because it has already been dealt with.”