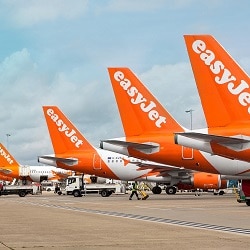 One of the first solicitors to enter the flight delay compensation market expanded his firm too quickly and took “shortcuts in the way he managed the claims”, a tribunal has found.

It suspended Mark John Hughes Walker for 18 months after he admitted that his initial struggles to adjust to the demands of the work led to multiple rule breaches.

Mr Walker, who was admitted in 1992, set up Hughes Walker in Bury in 2003 with a ‘Mr W’, and was its COLP and COFA. The firm is now closed and he has voluntarily ceased practice as a solicitor.

According to a statement of agreed facts and outcome, between 1 January 2015 and the start of a Solicitors Regulation Authority (SRA) investigation in September 2017, the firm handled 20,642 flight delay claims.

All were referred by FDCO Limited – a company recently dissolved following liquidation – of which Mr W and other individuals “known to” Mr Walker were directors.

In around 2015, Hughes Walker also began handling holiday sickness claims and Mr Walker developed a case management system to automate parts of the process for handling them, including letters of claim.

One of the allegations related to 24 transfers of funds from client to office account of sums to which the firm was not entitled. Mr Walker said these were done by Mr W without his knowledge, and that Mr W had resigned immediately before the start of the SRA investigation.

Mr Walker repaid the money but admitted he should have had better systems in place to monitor and supervise Mr W’s work.

He said “he placed too much trust in Mr W, who he had known for nearly 20 years and who had been the firm’s accountant/bookkeeper since the inception of the business”.

He conceded that, “as the sole director of a busy legal practice, there were… too many competing demands upon his time, a problem compounded by the influx of new airline work, which created a very large volume of financial transactions”.

Mr Walker explained that many airlines were not initially set up to handle large volumes of relatively small compensation payments and regularly made mistakes. The firm held £44,000 of payments which could not be immediately allocated in a suspense account, mainly from easyJet, which he said was fully aware of what was happening.

All the monies in the suspense account were in time either allocated or returned, but Mr Walker accepted the firm should have returned them more quickly.

He also admitted sending letters to holiday companies that contained incorrect and misleading information, but said there was no deliberate intention to mislead.

“The letters had been drafted on the basis of presenting a tableau of possible particulars of liability and heads of claim, by way of notifying the existence of the relevant claim to the relevant tour operator.

“The intention of the respondent was that the parties would, pursuant to the personal injury protocol, ‘further down the line’ discuss and exchange evidence relating to the pertinent issues such as liability, causation and quantum.”

With the large majority of the letters sent to the small number of major tour operators, Mr Walker said he assumed they would recognise that the letters were written in standard terms and that the intention was to notify a potential claim, rather than constitute a definitive statement of the details of each claim.

“Further, holiday sickness claims were a new line of business for the firm and dealing with them placed strains on the firm’s infra-structure. As the firm itself acquired more knowledge and experience handling this new line of work, the firm evolved its procedures and systems.”

For similar reasons, Mr Walker said he initially failed to give sufficiently early advice to clients about the merits of their claims, “not least because when the firm first started taking claims there was very little settled case law or practice as to how such claims would fall to be decided by the courts and therefore it was not entirely clear what issues would need to be explored in respect of each claim”.

Though he admitted acting recklessly, Mr Walker argued that he acted honestly and “does not believe he has ever taken advantage of any client”.

The agreed statement said; “He has cooperated with and made open and frank admissions to the SRA, and furthermore has voluntarily ceased practice. When he discovered the accounts rules breaches, he worked tirelessly to remedy them and made good the shortfall immediately.

“He has genuine insight into his shortcomings and is devastated that, after a previously unblemished legal career going back twenty-five years, he is leaving the profession in this manner.”

The tribunal concluded that the 18-month suspension proposed was appropriate, “having regard to the fact that the respondent had acted recklessly and lacked integrity”.

It continued: “[Mr Walker] had expanded the firm too quickly and had taken shortcuts in the way he managed the claims. This was clearly reckless as he had been aware of the risk that his case management system could create problems of this sort but he had proceeded anyway.”