Flight compensation claims to rise, but will passengers use law firms? 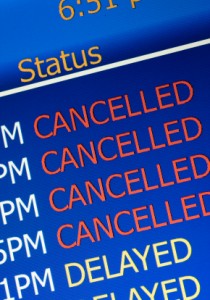 Flight delays: 75% of passengers would prefer to claim directly from airlines

More than a million passengers travelling to and from UK airports are still to claim delayed flight compensation for last year, a survey has found.

However, the survey also found that passengers may prefer to claim compensation directly from airlines in the future rather than through law firms or claims management companies (CMCs).

David Mort, director of IRN Research, told Legal Futures: “There is an opportunity for law firms and CMCs to take a slice of the market, but at the moment it is unclear how big that slice will be.

“These claims are relatively small, unlike PPI where claims can run into thousands. I’m not convinced that some clients claiming three to five hundred pounds will want to go to law firms, which are seen as expensive and take on average around 25% of compensation awards.

“However, the survey shows that some people are reluctant to claim because they think the process is difficult or complicated. They might want to use lawyers, who know what they’re doing”.

Mr Mort said that there may be more class actions as advertising by law firms and CMCs raised awareness of compensation rights.

The Supreme Court rejected permission to appeal applications from airlines Jet2.com and Thomson, fighting delayed flight claims, at the end of last month.

The decision followed two Court of Appeal victories this summer by Cheshire firm Bott & Co, which has pioneered a compensation service for passengers.

The compensation specialists listed in the report include Bott & Co, but also www.airclaim.net, a subsidiary of Lawyers4U, and a dozen other air delay compensation websites, many based on the Continent.

The research, carried out last month, found that 55% of passengers would have claimed flight delay compensation if they had been more aware of the court rulings.

A spokeswoman for Bott & Co said that the firm had 14,000 claims on hold, pending the Supreme Court decision, and had experienced “a significant jump in claims and enquiries via our website and social media pages” since then.

The firm says research shows that airlines will often ignore claims brought directly, or say they are not valid.

It provides a tool on its website so passengers can assess whether they have a claim and offers a free claim letter to send to airlines. But for those who do not want to deal with it personally, or are having trouble with their airlines, Bott & Co will handle it under a conditional fee agreement, taking 27% of the final award. It will take over cases part-way through.

Speaking to Legal Futures last year, Bott & Co senior partner David Bott said the key to making the practice work is volume and a “really good front end” that enables the firm to sort the wheat from the chaff. “We’ve decided to make an investment in this,” Mr Bott said. “Other firms will struggle to pick the good claims from the bad very early on.”

The survey and an analysis of the results is available from IRN Research at a cost of £200. Email fhitchins@irn-research.com for more information.