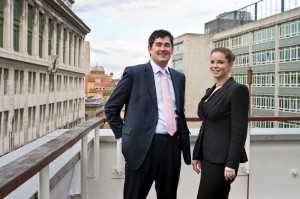 Two junior barristers from Liverpool have launched a public access service which offers legal advice to consumers for a £150 fixed fee.

It comes as a new fixed-fee ‘find a solicitor’ site seeks to target those who are just above the eligibility threshold for legal aid.

Following hot on the heels of last week’s surprise news that the Eddie Stobart Group has launched a public access service, Advise Me Barrister is the brainchild of Oliver Cook and Rachel Temple, both of Chavasse Court Chambers.

Around 30 barristers, including two QCs, have so far signed up to the service, under which they provide initial advice on the merits of the consumer’s case and how they should proceed. Advise Me Barrister acts as an intermediary and charges a small administration fee.

Should the consumer want to instruct the barrister, they can do and the role of Advise Me Barrister falls away, although it is also working with its barristers to put together a list of solicitors’ firms who can be called upon to act as well if their services are needed.

Mr Cook, a criminal law specialist, said: “Advise Me Barrister brings credibility to the online legal sector, and has been created by barristers, not businessmen. We aim to break the public perception of lawyers as money-grabbing fat cats by offering completely independent advice no matter whether that means no litigation and no further fees.

“Even though public access has been around since 2004, our market research when developing the Advise Me Barrister offer showed that a very high percentage of people still don’t realise that they can access a barrister’s expertise directly.”

Ms Temple, who specialises in family law, added that the idea was meant to benefit both the Bar and the public: “Quite simply, there are many people who have a legitimate claim or case, but have shied away from pursuing it due to the barriers, perceived or real, the legal profession has put up.”

The new website Low Priced Law has been developed by business, finance and leisure services group Horizon Group International particularly for those people who just fall outside eligibility for legal aid. It operates like many other referral sites and currently has around 15 firms on the panel, which director Ian White said he is looking to at least double.

Mr White said firms must be prepared to charge either fixed or capped fees, and the company charges a 15% commission once the panel solicitor has been paid.

Low Priced Law does have an unusual marketing strategy, however. Rather than relying on web searches, as many others do, it is offering local franchises for which people market the website in their area and receive commission for cases they generate.

Mr White said that as a result Low Priced Law is already receiving up to 500 enquiries a day, which firms on the panel have a short time to accept before they are offered to the next most appropriate panel member.

He added that the company, which has long been involved in providing consultancy services to the legal market, is also rolling out the website in the US.

See blog on Stobart Barristers and public access: Run that past me one more time