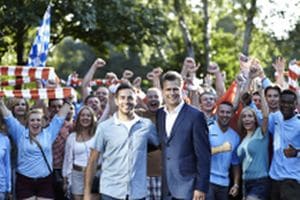 The advert (scroll down to watch) and others that will follow on the same theme of ‘That’s what justice feels like’ will be broadcast over 400 times a day across various TV channels. The campaign will also use digital display advertising and social media activity.

The company said that along with a wider rebrand, the 30-second advert “seeks to break away from the sector norm and create a more positive ambiance by focusing on the feel-good factor experienced by customers when justice has been done”.

To the soundtrack of REO Speedwagon’s ‘Can’t fight this feeling’, it shows a successful claimant receiving a cheque before celebrating with various people, including Mr Castle and a cheering crowd.

Mr Castle has appeared in previous First4lawyers adverts, one of which has racked up an amazing 8m views on YouTube.

Chris Rodgers, head of business development at the Huddersfield-based network, said: “The commercial reflects our status as a major player, with the third largest TV spend in the personal injury sector. We’re already a marketing collective for a panel of over 30 firms of personal injury solicitors, including many of the country’s top 100 practices, which is now expanding due to our ever-growing market share.

“We also have a team of more than 50 call centre agents and a 10-strong vetting team of legal advisers, plus a head team leader with 15 years’ legal experience, for example.

“The advert shows we recognise the sector’s marketing proposition should move in a new direction. It focuses on the emotion of achieving justice and realising the fight for this has been worthwhile. It’s a step away from the conventional, clichéd and downbeat industry adverts that highlight injury and places more focus on our own brand and values.”

Mr Rogers said First4lawyers has “one of the most compliant and transparent panel schemes in the market”, developed with the help of Frank Maher, of Liverpool-based solicitors Legal Risk, a leading QC specialising in compliance, and Yorkshire law firm Gordons.

Mr Rodgers revealed that First4lawyers is about to launch a “unique disbursement funding deal” for the clinical negligence market with a business partner, “which could avoid many firms having to close, due to lack of funding, and addresses a major issue of the moment”.

Simon Gibson, managing partner at Liverpool-based SGI Legal, one of First4lawyers’ panel law firms, said: “The quality of First4lawyers’ work and vetting is first-class. It’s striking how well-informed its clients are and how hard the company works with us to better understand the claims process from our side, together with any issues we’re facing.

“This, in turn, allows us to provide a better service to our clients. We certainly wish First4lawyers well with its new advertising campaign and brand identity.”