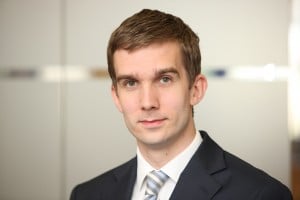 “This makes becoming a solicitor a more viable option for those who can’t get one.”

Mr Houchill did he did not think there would a “dramatic” rise in the number of solicitors admitted through ‘equivalent means’. “The requirement that you need to do three areas of law will preclude many people straight away. I know many paralegals who are very good, but have only done one area of law.

“People will look at this and plans their careers accordingly, so they do the required areas of law. Some firms will be OK with this, others will stop people doing them because, as a paralegal, you are valued for the particular experience you have.”

Mr Houchill studied law at Essex University before heading to St Petersburg and teaching English for two years. He described himself as a “good intermediate” speaker of Russian.

On his return he worked as a paralegal at the Children’s Legal Centre in Colchester for six months, while travelling into London in the evenings to do a part-time LPC.

This was followed by a year working as a paralegal at Wilsons in Tottenham, North London, specialising in family and child law. However, financial pressures persuaded him to move to a boutique immigration specialist, Gherson, in Marble Arch for a further year.

He moved again to Bates Wells Braithwaite in July 2013, where he is now a senior immigration adviser and, after he was admitted yesterday, a solicitor.

Mr Houchill said he felt “pleased and relieved” to receive the letter from the Solicitors Regulation Authority after “being a paralegal for so long”.

However, the news may come as a disappointment to another paralegal, Shaun Lawler who said last month that he hoped to be the first solicitor admitted to the profession through the ‘equivalent means’ route.