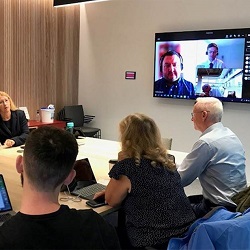 QES: Parties gather around a table at Hugh James

The UK’s first-ever property deal using the new qualified electronic signature (QES), which is being trialled by HM Land Registry (HMLR), was completed this week.

A QES is a more advanced form of electronic signature that does not need to be witnessed, with the signer’s identity verified by a ‘qualified trust service provider’ – an independent checker.

Earlier this month, HMLR said the QES could be a “gamechanger” for conveyancing.

Welsh firm Hugh James acted on the transaction, which was completed with the property transferors and transferee in the room, and observed remotely by HMLR staff.

In all, the transaction took just 24 hours, from QES signing, registration and the transfer of title becoming legally effective – a process which Hugh James said would usually take six to eight weeks. It used DocuSign QES.

Associate Richard Jones said: “There were plenty of learning points, which will be fed into the final stages of the project before being rolled out nationally.

“It’s a significant step forward for something that everyone in the UK will experience eventually, as we move towards self-verification of deeds like tenancy agreements, mortgage documents and business contracts.”

Nicola Evered, digital transformation manager at Hugh James, added: “This has the potential to dramatically speed up transactions and make the whole process more streamlined.

“There will come a time when we’ll take a new instruction from a client, prepare the documentation, and issue the deeds for signing all in the same day.”

Meanwhile, the Ministry of Justice (MoJ) has established an industry working group of experts to improve standards, reliability and security in electronic signatures and other means of legally executing documents, and to address best practice in this area.

The group was set up following a recommendation by the Law Commission in September 2019, which the MoJ accepted in February 2020.

The group is chaired by Mr Justice Fraser under the oversight of Lord Justice Birss, the deputy head of civil justice, and assisted by Professor Sarah Green of the Law Commission.

The group began meeting in the summer and is aiming to produce an interim report by the end of the year, setting out its initial thoughts and areas to be explored further, together with those areas that may require public consultation

Its terms of reference include best practice guidance for the use of electronic signatures, analysis of different technologies’ security and reliability, and investigating solutions and safeguards for video-witnessing of deeds.