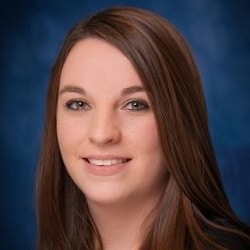 A paralegal at listed law firm DWF has become the first chartered legal executive to qualify through an apprenticeship.

Evie Elsbury works in the professional negligence team in the firm’s Leeds office, having begun her legal career in 2014 at Triton Global, an innovative alternative business structure that was bought by DWF in 2017.

Speaking during National Apprenticeship Week, she said that, having gone to university to study ancient and medieval history, “with half an eye to becoming a history teacher”, she quickly that decided that it was not for her and she wanted something more vocational.

Within six weeks of leaving the course, Ms Elsbury began her job at Triton, starting the five-year apprenticeship in September 2014.

For the next four years, she had to study alongside her work, first to gain her Level 3 qualification – equivalent to A-levels – and then her Level 6, which is at degree level. While at Triton she did this at night school, DWF offered a chartered legal executive apprenticeship scheme through CILEx Law School, as a result of which she received a day a week of study leave.

Would-be fellows of the Chartered Institute of Legal Executives (CILEx) also need to have three years of qualifying work experience, which began two years into her studies. Having completed that last September, Ms Elsbury submitted her portfolio showing that she has obtained the knowledge, skills and competences expected of a CILEx Fellow. Her qualification was confirmed last month.

“Pursuing a career in law is highly competitive, where there can be potentially hundreds of applicants for one training contract. It can feel a bit dog-eat-dog out there when you’re starting out, but the apprenticeship seemed like a fantastic opportunity, and I grabbed it with both hands,” she said, adding that she had no student debts as a result of qualifying this way.

“I’m 25 and have already had six years in the industry. I’ve travelled within the UK and Ireland and put everything I’ve learned into practice. This definitely helped me retain what I’ve learned in my studies.”

Ms Elsbury said she saw no need to go on and qualify as a solicitor, especially with the reputation of CILEx and its members on the rise in recent years: “One of the partners at Triton was a chartered legal executive, so I’ve never seen it as a bar.

“I’m not treated any differently from newly qualified solicitors, and DWF has made it clear that they’ll back me as far as I can go.”

So what would she say to others thinking of qualifying via an apprenticeship? “I’d say you’ve got to be dedicated. You’ve got to know it’s what you want to do and commit. That said, I’d definitely recommend it.”