Firms “need to respond” to customer service challenge to survive 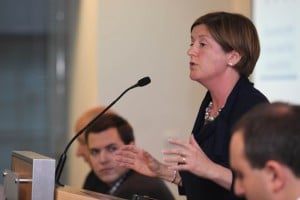 Adams: next three years will define winners and losers

The successful law firms of the future will be the ones that truly understand customer service, according to the boss of a leading regional law firm that checks its clients’ satisfaction every fortnight.

Simon McCrumb, managing partner of Darbys, said clients receive a text every two weeks asking them to rate the service they are receiving as either A, B or C.

If it is an A, then no action is taken; a B goes to the team leader and those who select C receive a call from Mr McCrumb himself. He said he was not aware of any other firm that sought feedback so regularly.

Speaking at an event organised by Peppermint Technology to mark the publication of its annual survey of what clients want – which highlighted the increasing importance of customer service as a factor when consumers and businesses choose their lawyer – Mr McCrumb said the findings show that change in the profession is accelerating.

He said his own experience of using other law firms has been that the service is “shocking”. He added: “What we’re up against is really not very good.”

A lawyer’s answer to an unhappy client who complains about receiving a 10-page letter three months after being instructed is simply to try and get the letter out quicker next time, not that the letter needs to be different as well. “You have to look at how the service is received,” he said.

The chief legal ombudsman, Adam Sampson, told delegates that the availability of legal know-how on the web was putting a new emphasis on lawyers packaging what they do “in a way that is very consumer friendly”.

He explained: “They don’t need what’s in your head because they can find it [on the internet],” he said. “What they need is for you to interpret, package and systemise that knowledge and to help them deploy it in the interests of what they’re trying to achieve.

“That’s why in my judgement customer service has come up in a major way [in the research]. It’s not access to knowledge, but access to your help that they need.”

Mr McCrumb also questioned the focus many firms put on winning new clients, saying they need to concentrate first on keeping the ones they have and then cross-selling “everything you do to them”. Lawyers are the wrong people to cross-sell – even if they want to, they are too busy, he said. Instead it has to be a centralised, data-driven operation.

Admitting that fixed fees “frighten” him as the manager of a business that does not yet “make its living” from them, he said the profession will have to move from renegotiating the fee where they have done more work than anticipated – this will come from “central management laying down policies and backing the lawyers when they stick to [the fee]”.

“We’re going to have to [move to fixed fees],” he said. “It’s the courageous firm that’s going to jump and I think reap a reward.”

Mr Sampson suggested that clients are more interested in “predictable pricing” – where they can control the costs, such as choosing between an expensive and cheaper barrister – rather than having it absolutely fixed.

She predicted that the pace of change is such that “the next three years will define the winners and losers”.

With customer service increasingly influencing buying patterns, and standards “constantly going up”, she asked: “What are firms doing to keep pace? People are expecting to deal with legal services provider in the same way as other industries and that’s where some of the catch-up needs to be achieved.”