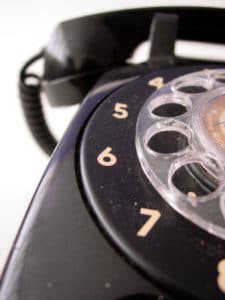 Waiting by the phone: But solicitors don’t ring back

Law firms still have a long way to go in dealing with enquiries from potential clients, with a failure to follow up initial contacts a particular weakness, mystery shopping research has found.

In the most extreme example, not one of the 50 medium-sized law firms that received a walk-in enquiry followed it up, with researchers saying that firms are potentially losing a lot of work as a result.

Only 10% of telephone and 12% of website enquiries received a further follow-up after an initial response.

The research was undertaken by Shopper Anonymous, which undertook 400 ‘contacts’ with the firms in person, by telephone and online to test how they dealt with enquiries based on common issues such as property purchases, wills and commercial business.

Firms fared best when someone walked into their offices seeking help – as judged by 65% of would-be clients saying they would contact the firm again, compared to 55% for telephone and web customers – but the research uncovered significant shortcomings in how firms dealt with walk-ins.

Contact details were taken in just 14% of contacts, while the benefits of using the firm were outlined in only 15% of conversations.

When it came to website enquiries, all firms responded initially, although only two-thirds did so within four hours. Some 22% took more than two days to follow up.

In more than half of cases, the initial response was not personalised, and more than a quarter (28%) of shoppers noted spelling or grammatical errors.

More than 200 phone calls were undertaken to the firms, and in 79% of them, the enquirer was able to speak to a fee-earner. Perhaps because of this, only 47% had their contact details taken.

Where the caller left a message (5% of firms did not have an answerphone), 76% of firms called back, half of them within three hours. But again, 14% took more than two days.

Reception service was hit and miss, with only 42% asking for the customer’s name on the first phone enquiry, while 20% of people were put through to the fee-earner’s voicemail.

Jim Smith, a regional sales director at Shopper Anonymous, said the survey showed that firms were “almost certainly missing out on business”.

With an average case across a typical firm work £3-4,000, converting just four more cases each month would have “a big impact on the bottom line”, he said.

“With the market tightening, and more legal issues going to non-lawyer sources, they need to get better.”

Mr Smith said the shoppers made the cases big enough to interest the firms, so the results were not influenced by firms ignoring enquiries they thought would not be worth their bother.

Even if they did, he added, they were not to know if a small instruction could lead to a much bigger one.

While fee-earners “generally have a reasonable bedside manner”, they did not have the “sales craft”. For example, Mr Smith said they would end the conversation with comments like “I’ll leave it with you to have a think about”, by which they would lose control of the potential instruction.