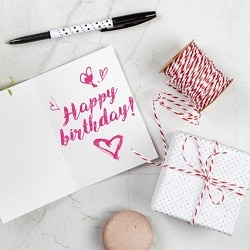 A legal secretary who claimed she felt humiliated and insulted by a colleague commenting on her 50th birthday has lost her claim for harassment and age discrimination against the law firm.

Ms H Munro even requested that the employment tribunal and witnesses refer to her age as ‘x’ rather than specifying the number.

She said that to do otherwise would further violate her dignity. The tribunal refused.

Ms Munro made claims of harassment and/or direct discrimination on the grounds of age and detriment from making public interest disclosures against four-partner Salisbury firm Sampson Coward.

She began work as a legal secretary in November 2017. Employment Judge Livesey observed: “The claimant is a private person and someone who does not share personal information at work. She is guarded about her personal details, including her age.”

But it was “the practice within the office to mark birthdays with cards”.

Ms Munro was on leave for a week in May 2018, during which her colleagues believed she would turn 50.

She argued that this information must have come from her personnel file, but the tribunal found that she had told a fellow secretary, a Miss Wickham.

The tribunal recorded: “On 29 May, the claimant returned to work after annual leave and the bank holiday. Ms Norrie [another secretary] spoke to her and it was agreed that she either said ‘it was your 50th wasn’t it, you can’t hide it you know’ (her account) or ‘you are now 50. You can’t hide it from us’ (the claimant’s account).

“Whatever the precise words, we considered that the effect was very much the same. The claimant asserted that she was ‘utterly shocked by this remark which [she] felt was insensitive, humiliating and insulting’.

“She alleged that it was said as a taunt, that Ms Norrie, with whom she had got on with well, had ‘jumped at her like a snake’.”

However, Ms Munro – who represented herself before the tribunal – “shied away from putting that case to Ms Norrie in cross-examination, despite our encouragement”.

Ms Munro left the office early that day, which she said was because she was so upset, and phoned in sick the day after.

When she returned, she presented a letter to partner David Coward that said: “Although I like [Ms Norrie], I am still extremely angry and upset with her utter insensitivity and blunt rudeness at coming to my desk and announcing to my face very proud of herself what she believed she knew about my passing years and rubbing my nose in it.

“Her unsolicited and unwelcome comments left me reeling. I felt ambushed, punched, slapped and humiliated… I do not need her to be spoken to and I do not want an apology.”

The tribunal said there had already been concerns about Ms Munro’s performance and, a few days after the incident, one of the fee-earners she worked for complained about the quality of her work.

The partners decided to offer her a settlement that would see her leave her job with an agreed reference, one month’s salary in lieu of notice and £1,700.

While she considered the offer, Ms Munro made what she said were three public interest disclosures about how data was held at the firm.

She wrote: “My concerns about my own data breach have led me to consider how insecure client data is. I have serious concerns that there is a public interest issue here as, if my data can be breached, any other person’s data you are holding, including those of clients, could be breached.”

Mr Coward replied to suggest that she was only raising this because the length of her employment meant she could not claim unfair dismissal. On 18 July, Ms Munro resigned.

Rejecting the claim for harassment over Ms Norrie’s comment, the tribunal said her sensitivity about her age “appeared unusual and extreme”.

It continued: “The comment was trivial and had not been delivered maliciously. Whatever the precise words which had been used, they ought not to have been considered as words of harassment when viewed objectively.”

On age discrimination, there was insufficient evidence from which to conclude that Ms Norrie, 52, or Miss Wickham, 60, would have been treated differently.

The tribunal found that, while there could have been a public interest in the disclosures about risks to client data, here they were made “for reason of pure self-interest”.

“She had seen how client data was kept for over six months but had not said anything… It was only after the meeting of 15 June, when she was offered a choice between a settlement to leave her employment or facing an internal process, that she made the disclosures.”

The tribunal found the language used in the disclosures “was suffused with statutory language which the claimant had picked up from her reading”.

It said: “She accepted in cross-examination that she had read up on her position after 15 June, that she had realised that she could not have brought an ‘ordinary’ complaint of unfair dismissal but could if she was protected as a whistleblower.

“That is what she therefore did; she made the disclosures to improve her position and create an argument which would otherwise not have existed.”

The tribunal awarded Sampson Coward costs of £1,700 – equivalent to two days of refreshers for its counsel – for Ms Munro’s unreasonable conduct in making the whistleblowing element of the claim.