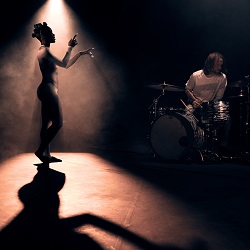 A North-East practice has taken the unusual step of turning to poetry and jazz drumming in a bid to stand out from the law firm crowd.

Square One Law has launched a campaign called ‘Fearlessly Solving’, at the heart of which is a striking film (see below) bringing together drummer Ed Smith, who has played with Geordie rock star Sam Fender, and spoken poetry performer Lerato Azula, originally from Newcastle.

The firm, which has offices in Newcastle, Leeds and Darlington, said the pair told “an impactful story that being fearless is not only about breaking from tradition, standing apart and solving problems creatively, but also encouraging your people to act with integrity, watch their clients’ backs and help drive the business forward”.

Part of the poem goes:

Truth is, law and regulations are complex
But being a good lawyer
Is not.
Not if you listen, think, share your ideas
and actively avoid being limited by conventions
fearlessly and with integrity.
Don’t just list out legal options or process legal outcomes.
Show your hunger for their business.

Senior partner Ian Gilthorpe said: “We wanted to communicate how we differentiate ourselves in a way that makes people take notice.

“All law firms say they are client focused and provide excellent service delivery, but few have developed their cultures to think creatively.”

It was put together by Newcastle-based creative agency, The Traveller and the Bear. Antonio Bachini, its co-founder and creative director, said: “We quickly understood that Square One Law was not like other law firms. They care. They have people’s backs. They’re not afraid to do their own thing.

“So we looked for a fearless way to tell their story and jazz and the spoken word ticked all the boxes.”

Mr Gilthorpe said that, in the same way that “great musicians are talented but not all can play jazz”, there were “many talented lawyers, but they don’t all think creatively or deliver the same bespoke service as Square One Law”.

He added: “Creativity is vital for all businesses and the arts industry has suffered very badly during the pandemic, so we really liked the idea of supporting artists to tell our important message about having a fearless commitment to helping clients.”