Firm did not discriminate against assistant sacked after three days 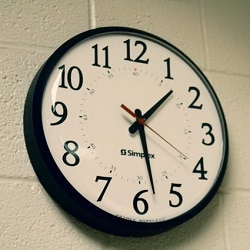 A conveyancing assistant dismissed by a law firm for turning up late on each of her first three days was not a victim of sex discrimination, an employment tribunal has ruled.

Employment Judge Goodrich said it was only after Laura Sylvester was dismissed at the end of her induction period that she mentioned that her daughter was sick.

He said it would have been “surprising, perhaps even astonishing” if she had not been dismissed.

Judge Goodrich said that under the disciplinary procedures at Barnes & Partners a multi-branch firm in London and the northern home counties, persistent lateness was classed as gross misconduct.

“On 100% of the days that the claimant worked for the respondent not only was she late, she failed to notify her employer in advance that she would be late on any of the three days in question, and she had been told explicitly at her interview for the job with Mrs Payne [a partner] that someone reliable was needed and why.”

The judge said 77% of the law firm’s staff were female, of whom 30% had children, including five of the six female partners, and some employees worked flexibly.

“This does not appear to be a workplace discriminating against women on the basis of timekeeping and childcare responsibilities.”

Judge Goodrich said that having arrived at work late on her second day, Ms Sylvester was allowed to leave early to pick up a prescription.

“There is no reason to suppose that any man or woman with childcare responsibilities would have been more favourably treated than the claimant.”

The employment tribunal heard that Ms Sylvester had “worked for many years carrying out property work in legal departments”.

In her CV she described herself as a “highly experienced legal secretary” who had worked “in about 25 solicitors’ offices, often in temporary positions”, although it was pointed out at the hearing that in one case she was dismissed for lateness.

Ms Sylvester was interviewed by partner Nichola Payne at the firm’s Chingford office – which was near where she lived – for the role of assistant specialising in property transactions.

During the interview, Ms Payne made it clear that, because of her childcare responsibilities, the law firm “needed someone reliable to open the office every morning because she has to drop off her child/children before work”.

Ms Sylvester was offered the job in October 2018 and told that she would have to attend the firm’s HQ in Enfield for induction training.

On her first day she turned up 48 minutes late, having called the firm around 15 minutes earlier to say she had got off the train at the wrong station. On her second day she was 15 minutes late, but did not call. On her third and final day, she was an hour late.

The firm’s HR co-ordinator contacted the managing partner, “a woman with a dependent child”, who discussed the issue with him and Ms Payne.

Ms Sylvester was called to a meeting at the end of the day, where she was told she was being dismissed.

“The claimant then said that she was late because her daughter was unwell with an eye infection and she had to care for her before she made her way to work.”

Judge Goodrich said Ms Sylvester claimed she mentioned her daughter’s illness before she was dismissed. However, on the basis of the evidence, the tribunal found that this was not the case.