Fine for male trainee who told female colleague: “I roofied your drink” 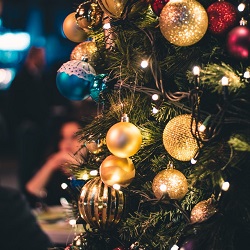 Christmas party: Trainee still does not remember what he did

A trainee solicitor who subjected two female colleagues to “harassing and abusive behaviour” at a work Christmas party has been fined £2,000 by the Solicitors Regulation Authority (SRA).

Oliver Conway’s conduct led to him being dismissed by Exeter firm Ashfords, which had specifically warned staff about the applicability of the SRA’s Standards and Regulations and the need to maintain professional standards at festive events.

According to a notice published yesterday by the SRA, Mr Conway became drunk during the after-work event in December 2019.

At a nightclub, he offered one woman a drink saying that he “had roofied it” – ie, mixed in a date-rape drug – and then slapped her on the bottom.

There was no suggestion that Mr Conway actually placed any drugs in the drink.

Later in the evening, he squeezed another woman’s bottom. She pushed him away and told him not to do that, but he went on to grab her around the waist and drag her away from a conversation she was engaged in. He also “repeatedly pulled [her] by the arm and put his hands around her waist and hips”.

He was summarily dismissed following an internal investigation by the firm and Mr Conway reported his conduct to the SRA.

He told the regulator that he was so drunk that he still could not remember the events of that evening, but accepted they had taken place and that he had acted without integrity and damaged public trust in the profession.

He said he was “embarrassed and humiliated” by what he had done.

In deciding that a fine was appropriate, the SRA said it took account of Mr Conway’s admissions and that he had, “voluntarily and without invitation”, written letters of apology to the two women prior to the SRA’s involvement.

He “expressed remorse and demonstrated insight into his own conduct”, showed he understood “how his conduct caused discomfort to his colleagues” and submitted character references.

The SRA said it accepted that this was “a one-off event and does not form a pattern of misconduct beyond the evening in question”.

Nonetheless, his behaviour amounted to a breach of his professional obligations and “his own personal moral code”, in that it involved “touching of an intimate area” of the women’s bodies without their consent, a comment “which could have been perceived as being threatening”, “subjecting his colleagues to harassing and abusive behaviour which was capable of causing harm”, and a wilful or reckless disregard for his regulatory obligations.

The SRA is looking to revise its guidance on fines to say that they are inappropriate for cases of sexual misconduct, discrimination and harassment except in exceptional circumstances.