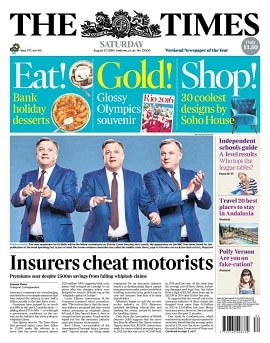 Finger of blame at insurers, rather than claimant solicitors

The insurance industry had a taste of its own PR medicine over the weekend after The Times accused insurers of “cheating motorists” by not passing on whiplash savings.

The newspaper’s lead story said that “insurance companies are overcharging motorists for cover despite measures that have helped the industry to save half a billion pounds in the past three years.

“Premiums have jumped by as much as a fifth in the past 12 months alone — adding about £115 to bills – even though a government crackdown on the no-win, no-fee industry has led to a drop in whiplash claims.”

“It suggests that the overall cost to the insurance industry of these claims has dropped from more than £4.1bn in 2013 to £3.6bn last year. Motor insurance prices, however, have actually risen over the past 12 months.”

The Times quoted Louise Ellman, chairwoman of the Commons transport select committee, as saying: “The bottom line is that the insurance industry promised that they would reduce premiums as whiplash claims fell and, if they haven’t done it, they’ve reneged on their promise. Fraud must be wiped out but the insurance industry must also honour its promises.”

Brett Dixon, vice-president of the Association of Personal Injury Lawyers (APIL), told the paper that injured people were being made “scapegoats” for a dysfunctional insurance industry whose first duty was to its shareholders.

The ABI insisted that savings of about £1.1bn had been passed on to customers, twice as much as the industry had saved through the reforms. “Those initial savings that were passed on were overpriced and the market is now trying to rectify itself,” it told The Times.

On Twitter, APIL – claiming credit for the story, which also appeared, less prominently, in The Sun – said that in fact insurers had seen the £500m benefit in each of 2014 and 2015, meaning that they had indeed saved £1bn.

Other claimant solicitors took to social medial to welcome the publicity. Scottish solicitor Scott Whyte tweeted: “Finally mainstream media waking up to the fact that insurers are lying to us all.”

The campaign group Access to Justice added that the next round of reforms were “guaranteed to exacerbate this disheartening trend”.

The PI industry is still waiting for the Ministry of Justice consultation on increasing the small claims limit for whiplash cases and abolishing general damages for minor soft-tissue injuries, some nine months after the plans were announced in the Autumn Statement.

Meanwhile, more action against cold-calling is back on the agenda, with consumer group Which? calling for the directors of companies found guilty of making such calls personally accountable.

Director of campaigns and policy Alex Neill said: “Millions of people are still being pestered by nuisance calls and it’s time for tougher action that holds responsible company directors personally accountable for the unlawful actions of their companies.

“This will stop rogues stepping around the rules by closing one business and re-establishing a new one, and avoiding fines for making nuisance calls.”

Which? said that although the Information Commissioner’s Office (ICO) was given tougher fining powers against cold-calling companies in April 2015, of the 22 fines issued since then, only four have been paid in full. Two have been part-paid, with the remaining fines not been paid at all or the companies have gone into liquidation.

New figures from the ICO show that, at the end of July, it was conducting 150 investigations into cold-calling, while personal injury was by some distance the major cause of complaints in relation to ‘live’ cold calls – 28% of the complaints it received in July. Calls relating to energy savings, home improvements and PPI were the main cause of complaint in relation to automated calls.

The signatories commit to never cold calling, never trading in accident data and not using inappropriate or misleading advertising.

It started with eight signatories with those joining since including Express Solicitors, Fieldfisher, InjuryLawyers4u, Roberts Jackson, Speed Medical and Winn Solicitors.

National Accident Helpline said it wanted more businesses to sign up to the charter, while signatories were considering ways to strengthen it, such as establishing a steering group to monitor and enforce any breaches of the initiative’s commitments.

Simon Trott, managing director of National Accident Helpline, said: “To secure over 60 signatories from organisations across the industry in just a year is a remarkable achievement and shows the personal injury sector’s real commitment to stamping out unethical marketing practices for the benefit of consumers.

“The collective commitment of signatories has undoubtedly contributed to recent action by government and regulators to help tackle cold calls and ensure that consent is secured before sharing data with third parties for marketing purposes. Despite these steps, there is still more to do to ensure that unethical practices are a tactic of the past.”