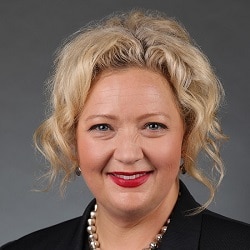 The government of the Australian state of Victoria has launched a review into sexual harassment in the legal profession following a “deeply disturbing” survey that found that a majority women had faced it.

Fiona McLeay, chief executive of the Victorian Legal Services Board – which conducted the survey – and the state’s Legal Services Commissioner, said there was a need to “destabilise the structures that support serial harassers”.

Ms Leay went on: “I have said before that education and formal reporting mechanisms cannot alone stop harassment.

“We need to build a legal culture in which sexual harassment is not tolerated and where those who experience, witness and hear about it are able to speak up.

“We need to identify and introduce mechanisms that limit the potential for abuses of power.”

The survey found that that more than one in three lawyers in Victoria overall had experienced sexual harassment at work, in line with findings for Australian workplaces generally.

Almost two-thirds of female respondents had experienced harassment, compared with just over a tenth of men.

Most commonly it took the form of intrusive questions about their own or someone else’s private life or physical appearance, “sexually suggestive sounds, comments or jokes” and inappropriate staring or leering. Nearly in six respondents said they had experienced at least one physical form of sexual harassment.

Perpetrators were almost always men and “very often” senior to the person they harassed, usually senior members of the profession.

Few incidents of sexual harassment were reported by the victim, and only one in ten people reported incidents they witnessed or heard about first-hand – far lower than in Australian workplaces generally.

The review, commissioned by state Attorney General Jill Hennessy, will examine “sexual harassment prevention, support, enforcement and education” in the state’s courts and tribunals as well as “policies and practices of law firms that provide services to the government”.

It will “identify ways to build a culture that calls out sexual harassment, and give workers and others across the justice system the confidence to speak up without fear of reprisal”.

Measures will be considered to prevent sexual harassment, improve reporting and support, raise awareness, and ensure accountability in workplaces.

The state government will also conduct a separate review of “the policies and practices of law firms that provide services to government”, including a review of “training on sexual harassment for all barristers and solicitors”, and seek “internal audits and assurance” on procedures.

Ms Hennessy commented: “A workplace that is not free from sexual harassment is an unsafe workplace – these reviews will identify the changes the justice and legal sectors need to make to improve workplace culture and enforce compliance.”