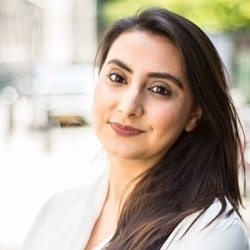 The only female Afghan-born barrister practising in England and Wales revealed yesterday that she had been asked by a solicitor to return her brief because the client wanted “a white male barrister”.

Lawyers on Twitter exploded with anger after Rehana Popal of 10 King’s Bench Walk tweeted what had happened.

She wrote: “Just had a solicitor call to tell me that a case that I had previously been instructed on, which was adjourned administratively due to lack of judges was now re-listed for December. However, the client has said he doesn’t want an Asian female but a white male barrister.

“Solicitors asked if I could please return the papers. Great to know that no matter what you do in life, you’ll still be judged by the colour of your skin and gender.”

In later tweets, she said the “saddest thing” was that she was not surprised. “It’s not the first time this has happened and I’m sure it won’t be the last… The cherry on the cake, the client wants a full refund.”

She said she would be “entirely sympathetic” if a client who was a victim of sexual violence wanted a barrister of the same sex. “I think it’s different when it’s simply racism.”

Ms Popal told Legal Futures that she did not plan to report the solicitor to the Solicitors Regulation Authority, however.

She said: “The solicitor was very reluctant and apologetic. The request was coming from the client… However, I do wish the solicitor had done more.”

The condemnation on Twitter was swift, with many urging her to report the solicitor, and arguing that their action breached both the Solicitors Code of Conduct (SCC) and the Equality Act 2010.

Section 47(6) provides that “a person must not, in relation to instructing a barrister (a) discriminate against a barrister by subjecting the barrister to a detriment…”

Adam Creme, head of legal services at UNISON, tweeted: “This is so outrageous. The solicitors should have told the clients to sling their hook.”

Criminal defence solicitor and law lecturer Steve George wrote: “We’ve had similar requests at my firm. On every occasion we have then refused to act any further for that client. We don’t tolerate that kind of behaviour.”

Solicitor Mike Winston said: “I teach professional standards to trainee solicitors and, unbelievably, we use this as an example of a client asking you to breach the SCC. I never thought I’d actually come across it in real life…

“Client is absolutely not king. We are officers of the court first and MUST refuse to act if a client instructs us to breach the SCC.”

Ms Popal was child refugee from Afghanistan who came to the UK without being able to speak any English and became the first Afghan to be called to the Bar by Inner Temple.

While studying to be a barrister, she set up a non-governmental organisation to raise awareness of the challenges faced by internationally displaced people and also worked as an analyst on the UN Drone Inquiry, evaluating allegations that the use of drones in extra-territorial and counter-terrorism operations has resulted in disproportionate levels of civilian casualties.