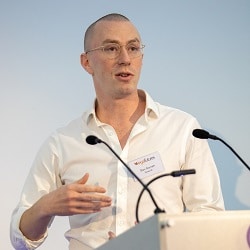 Garrett: Prices in the death industry are unaffordably high

Online will-writer Farewill has raised £20m as it targets a major expansion in revenue, staff numbers and new services, including powers of attorney.

They join previous investors, including Augmentum Fintech, TransferWise co-founder Taavet Hinrikus and Kindred Capital. It takes the total raised so far to £30m.

Farewill chief executive Dan Garrett said the company achieved its target of writing one in every 10 wills in the UK early this year – it is handling 10-12,000 a month – and had written 15,000 free wills for NHS workers since February.

Mr Garrett told Legal Futures the new funding would enable Farewill to introduce a telephone will service, particularly for people aged 80 and over, who were less confident online.

The firm would also be launching an “incredibly well-priced” powers of attorney service, similar in approach to its will-writing service.

“With us a huge differentiating factor is price,” Mr Garrett said. “We have a campaigning belief that prices in the death industry are unaffordably high.”

He said Farewill’s probate service, launched last spring, would be improved through “better automation”, increasing the number of customers it could serve. Probate currently accounts for around 35% of Farewill’s revenue.

Mr Garrett said partnerships, with banks, mortgage lenders and particularly charities, were a “huge part” of the firm’s growth.

Having raised £265m in pledged legacy income by writing free online wills for charities like Cancer Research UK, Macmillan and Save the Children, he said the aim now was to reach £1bn by 2023.

Mr Garrett said the £20m would also be used to build up Farewill’s team, the “main factor in our success.”

He said that while other businesses had put staff on furlough, Farewill had recruited 25 more staff by the end of March to cope with a surge in demand caused by the pandemic.

Mr Garrett said staff numbers had tripled from 31 a year ago to 95 now, and this would increase to 180 over the next year. There are six solicitors among the firm’s legal staff.

He said revenue was expected to increase by five times from this June to next June – without saying what the current figure is – but the firm’s focus was on growth rather than profit, and the business was not expected to be profitable “for a couple of years”.

Mr Garrett said Farewill first noticed the impact of Covid-19 in mid-February, when there was a “quite shocking rise” in the numbers of doctors, nurses and NHS staff making wills.

From January to February this year, the number of sign-ups from NHS workers increased by eight times, and the firm responded by introducing a free will service at the end of February. Within a month it had written 10,000 wills for NHS staff.

Mr Garrett did not give a figure for the increase in non-NHS work as a result of the crisis, but said the pandemic had “accelerated a move to online that we had expected to take a few years”.

At the beginning of the crisis, he said it was “quite challenging” for the firm to recruit new staff and manage the transition to working from home.

“Almost everyone has found it more productive, but we miss our colleagues and it’s less fun.”

Mr Garrett said staff were already allowed to work from home for one day a week, and it was likely that this would increase to two or three.

He added: “The death industry is an overtly traditional one, and one of the last to adopt new technology. I’ve shaken the tree a bit in terms of customer expectations.”

Stan Laurent, a partner at Highland Europe, which invests in growth-stage software and internet companies, said: “How about entirely removing the administrative pain for those grieving for their loved ones? How about providing an affordable, effortless and considerate service? That’s what the Farewill team is doing – with an extraordinary blend of compassion and tech-fueled efficiency.

“For too long, the wills and funeral industry has been largely geared towards profit over purpose. Since our first meeting with Dan, we knew that Farewill had the ingredients to radically disrupt the industry. We’re excited to back them as they broaden their ambition.”

Tim Levene, chief executive of Augmentum Fintech, said: “Farewill has made phenomenal progress since our initial investment 18 months ago. They have grown by 10x and launched a suite of successful new products.

“This additional capital will provide further opportunity for the company to innovate an archaic industry, and become the leading digital platform in death services.”