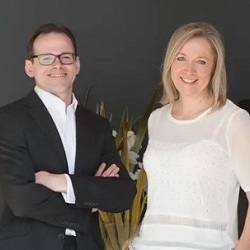 The founders of a specialist family law firm have spurned approaches by potential acquirors to transfer it instead into an employee ownership trust (EOT), saying the move sends a positive signal to would-be staff.

Robin Charrot said the aim of setting up Evolve Family Law in 2015 with co-founder Louise Halford was to run it “in a different way to the firms we had worked for”, with employee ownership always part of its ethos.

Mr Charrot said: “We felt those firms were run with profit front and centre, and all other concerns taking a back seat.

“They were not, in the main, happy places to work. We always wanted to diverge from that model.”

He said Evolve had a “flat, collegiate structure” with no billing targets and employees “trusted to do the right thing”. By removing “undue pressure” from employees, the aim was to create a workplace where people wanted to come to work in the morning.

One advantage of transferring ownership of Evolve to an EOT earlier this month was to “get the message across to potential employees as to the kind of firm we are”.

Mr Charrot went on: “We are not tempting young lawyers because we pay more. The attraction is the quality of the work we do, over and above the high street, and the friendly, non-pressured work environment.”

He said Evolve had first taken an interest in becoming an EOT back in 2018 when “some companies were going that way, but not law firms”.

The firm was a member of the Employee Ownership Association (EOA) and at the “fact-finding stage” when Covid struck.

“Everything was so uncertain that we parked it. We started it up again last summer.”

Mr Charrot and Ms Halford, who each owned 50% of the firm, sold all of their shares to the EOT and will be paid over 10 years.

“We’re in it for the long haul. It’s a commitment to the future and to making the firm thrive.”

Mr Charrot said Evolve had received three “fairly serious” approaches from potential purchasers, including two law firms and a private equity buyer. But he and Ms Halford decided this would “not provide the best outcome for our clients or our staff”.

Evolve has 14 staff, including nine solicitors, and offices in Crewe, Cheshire, and in Manchester. It is one of the smaller law firms to have embraced employee ownership to date.

Mr Charrot said the firm would not be following the example of fast-growing Stowe Family Law, but there might be “scope for geographical expansion in one or two areas” on a self-funded basis, combined with organic growth.

“I see the future market for boutique family law firms being quite strong, especially if they can provide services on a cost-effective basis”.

The arrival of no-fault divorce earlier this year had “created an uptick in divorces and enquiries”.

He said clients often came to the firm after they had dealt with the divorce themselves for advice on disputes over children or finances, and pressure on family finances was likely to lead to more use of unbundled services.

Mr Charrot said the traditional succession model for small law firms, with younger lawyers buying out older partners, was “difficult nowadays”. It required “the right younger people to be place at the right moment” and being prepared to make the “massive financial commitment” involved.

He said the only reason for a law firm not to become an EOT was “if you’re looking to make a large amount of money in a short period”; but if you were in it “for the long haul in the interests of clients and employees”, there was no downside.

James de le Vingne, chief executive of the EOA, added: “We congratulate our member Evolve Family Law on its transition to employee ownership; securing the ethos, values and culture of the business, as well as rooting jobs in the North West.”

Evolve was regulated by the Bar Standards Board when it launched in 2015 but later moved to the Solicitors Regulation Authority.

We reported last week that the sister and brother partners of an Essex law firm had also rejected acquisition offers from larger firms and decided to transfer their shares to an EOT.