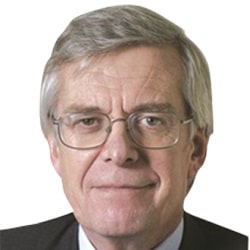 Fairpoint announced to the stock exchange last week that Mr Moat would provide “continuing assistance on the closure of the group’s debt management plan business, which is scheduled to complete in Q1 2017”.

Mr Harrel, one-time senior partner of what was then SJ Berwin and still a consultant at its successor, King & Wood Mallesons, has been Fairpoint’s non-executive chairman but will work in the business alongside chief financial officer David Broadbent while the search for a new chief executive goes on.

Last month, Fairpoint saw its share price crash after issuing a profits warning about its legal arm and said future dividends were likely to be suspended.

It said that while Fairpoint’s legal services business – Simpson Millar – achieved revenue and profits in line with expectations to the end of October, “the results for November are below plan and are likely to be lower than expected in December as well”.

The debt services side of Fairpoint was trading “broadly in line with expectations and the closure of the debt management business remains on track for completion in early 2017”. The update added: “However, the planned benefit of the reduction in associated overheads is taking longer than expected.”

As a result, Fairpoint told investors that its 2016 results were “likely to be materially below market expectations”.

Its share price, which reached a high of 165p in March, ended the year on 17p.

Meanwhile, Slater & Gordon announced last week that it has reached agreement with its lenders to make “further amendments to its bank finance facilities” – newspaper speculation in Australia said this was in advance of it breaching a covenant at the end of 2016 – as it considers refinancing and recapitalisation.

A statement to the Australian Stock Exchange said: “As previously disclosed [1], the maturity date for the group’s facilities is 2018, and there are a number of financial covenants and operational milestones that apply through the term of the facilities.

“The maturity of the group’s facilities remains unchanged. The company is working pro-actively and co-operatively with its lenders to explore and manage options for the refinancing and recapitalisation of the group. The process has commenced well ahead of the May 2018 deadline, with the objective of achieving an appropriate and successful outcome for stakeholders and a smooth process leading to that outcome.

“The company anticipates that as the process unfolds, there will be media speculation concerning its bank facility arrangements. The company does not intend to provide a running commentary on the process it is undertaking with the co-operation and support of its lenders and will make such appropriate further announcements as required in the ordinary course.”