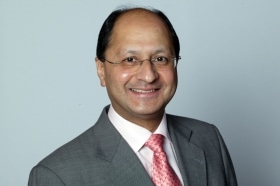 Vara: nobody’s going to hold anyone to ransom

The prospect of a strike by legal aid lawyers is “regrettable”, but there are lawyers who will operate under the new regime, justice minister Shailesh Vara has insisted.

In the second part of his exclusive interview with Legal Futures (click here for the first part), Mr Vara also urged lawyers to embrace the innovation showcased by alternative business structures (ABSs).

Speaking before yesterday’s announcement of a morning of ‘non-attendance’ by criminal law barristers, the Conservative MP noted that any strike action – “regrettable” though that would be – is “while off” and said he hoped there would be dialogue before then.

But he added: “The legal profession has many people in it. There are some people who are protesting. Clearly it’s important that the legal system continues to function effectively. But nobody’s going to hold anyone to ransom – that’s not the way forward.

“There are some people out there who are taking a realistic view and recognising that their profession is not immune [to the economic pressures facing the country] and I’d like to think that some of them will be able to step forward.”

Mr Vara was cautious when asked to agree with Attorney General Dominic Grieve, who told last month’s Bar conference that there were too many criminal law barristers.

But he said: “The Law Society itself has admitted that the 1,600 contracts are far too many and there are too many lawyers chasing far too little work. If you look at the statistics, for the past decade crime has been coming down… it’s for the legal market to sort itself out.”

He maintained the controversial argument that the UK has “one of the most generous legal aid budgets in the world” and that it still will be after the cuts. “If people want to try and shoot me down [on this assertion], fine – I’m a big boy and I’ll stand up and fight back.”

“Then you had the bar complaining when higher rights of audience – although the bar did get direct rights of access to clients.

“When ABSs came on board, people were complaining about them as well. But they’re being innovative, they’re injecting money into the system. So where we are right now is that lawyers have to think of more than just the law and think of an evolving legal market, and see how best they can be innovative and make sure they are at the cutting edge, rather than left behind.”