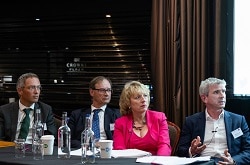 One of the country’s leading personal injury (PI) sets is planning to offer litigants in person a new way to obtain legal advice once the government increases the small claims limit, we can reveal.

Andrew Ritchie QC, the head of 9 Gough Square in London, said the lower costs of barristers meant they could compete effectively with solicitors.

He said that for small claims worth up to £5,000 – which is the government’s intended limit for road traffic accident cases – all the barrister would need to upfront was identify the heads of loss and sort out the witness statements.

There was unlikely to be a hearing because the vast majority of low-value PI cases settled, he noted.

This probably represented around one and a half hours of a barrister’s time spread over two or three sessions. “We haven’t done the full analysis but we definitely intend to offer it,” Mr Ritchie said.

His comments came during a discussion among leading figures in the PI world on whether larger law firms were busy designing self-serve models for clients with small claims.

David Bott, senior partner of Bott & Co, argued that the economics of the new regime meant self-service “has to be part of your plan”.

He calculated that firms would have to obtain cases at no cost and become four times more efficient to make small claims work under the proposed regime.

“[Self-service] has to be one of things you’re considering. On the current tariffs [as proposed by the government], I’m pretty certain you can’t get there by restructuring.”

Unbundling could well be an answer, and he noted too that, for the first time, he had this year seen professional indemnity insurers asking whether the firm provided unbundled advice.

Donald Fowler, the chief executive of ExamWorks UK – which owns a range of PI-related businesses, including leading medical agency Premex – said the extent of some of the IT investment that larger firms were making at the moment was “pretty impressive”.

Echoing Mr Bott, he said: “We mustn’t start with what we have today and think we can tweak it and drive efficiencies in that process.

“I think that process will be redundant. I think it’s an entirely new process where you’ve got to work out what is your route to market, where’s it coming from, who’s paying… It’s almost start-again territory.”

Amanda Stevens, chief executive of Hull-based Hudgell Solicitors, argued there would still be clients who wanted more empathy and a personal service, and that this remained a crucial part of what solicitors offered.

There would need to be “a conversation” with such clients, she said.

“If you’re getting to the point of being mechanistic… then for all the IT investment you may have made, you are not going to be one of the successful ones in the long run,” Ms Stevens predicted.

But Mr Fowler said giving “great customer service” was “completely incompatible” with the government’s view that these cases were very straightforward.

He continued: “I think we’re going to have to move our mind-set. Good customer service [will be] digitally enabled, slick, online, limited touches and only involving face-to-face or [telephone advice] at the absolute far end.

“And [clients] going to have to pay for it or else there isn’t money in that system to pay for that empathy and customer service.”